Close
Buddy Guy
from Lettsworth, LA
July 30, 1936 (age 85)
Biography
Buddy Guy is one of the most celebrated blues guitarists of his generation (arguably the most celebrated), possessing a sound and style that embodies the traditions of classic Chicago blues while also embracing the fire and flash of rock & roll. Guy began his recording career in 1959 and scored his first hit in 1960 with "First Time I Met the Blues." He spent much of the next decade a well-regarded journeyman, praised by peers and blues fans without breaking through to a larger audience; his best album of the '60s originally didn't even have his name on it (Junior Wells' Hoodoo Man Blues). However, he found an audience in Europe in the '70s and rock fans began discovering his work through the endorsements of noted fans Eric Clapton, Jimi Hendrix, Jeff Beck, Keith Richards, Stevie Ray Vaughan, and Mark Knopfler. Guy released little material in the '80s (his best-known album of the decade was 1981's Stone Crazy, one of the few that received an American release), as he focused on live work. But in 1991, Guy finally enjoyed a commercial breakthrough with Damn Right, I've Got the Blues, and since then he's been one of the biggest names in contemporary blues, touring frequently and cutting new material on a regular basis. In the 21st century, Guy was inducted into the Rock & Roll Hall of Fame, kept recording (2001's Sweet Tea, 2008's Skin Deep, and 2010's Living Proof are high points from this period), played an annual residency at his Chicago nightclub Legends, and even played at the White House, inviting President Barack Obama on-stage for a duet on "Sweet Home Chicago."

George Buddy Guy was born in Lettsworth, Louisiana on July 30, 1936, and is said to have first learned to play on a home-made two-string instrument fashioned from wire and tin cans. Guy graduated to an acoustic guitar and began soaking up the influences of blues players such as T-Bone Walker, B.B. King, and Lightnin' Hopkins; when his family relocated to Baton Rouge, Guy had the opportunity to see live performances by Lightnin' Slim (aka Otis Hicks) and Guitar Slim, whose raw, forceful sound and over-the-top showmanship left a serious impression on him. Guy started playing professionally when he became a sideman for John Big Poppa Tilley, and he learned to work the crowd and overcome early bouts of stage fright. In 1957, Guy cut a demo tape at a local radio station and sent a copy to Chess Records, the label that was home to such giants as Muddy Waters, Howlin' Wolf, and Etta James, shortly before buying a one-way train ticket and moving to Chicago, eager to make music his career.

Guy didn't enjoy immediate success in Chicago, and struggled to find gigs until his fiery guitar work and flashy stage style (which included hopping on top of bars and strutting up and down their length while soloing, thanks to a 100-foot-long guitar cable) made him a regular winner in talent night contests at Windy City clubs. Guy struck up friendships with some of the city's best blues artists, including Muddy Waters, Otis Rush, Freddie King, and Magic Sam, and landed a steady gig at the 708 Club, where he became known as a talent to watch. In 1958, Magic Sam arranged for Guy to meet Harold Burrage, the owner of local blues label Cobra Records, and Guy was soon signed to Cobra's sister label Artistic Records. Willie Dixon produced Guy's debut single, "Sit and Cry (The Blues)," as well as its follow-up, "This Is the End," but in 1959, Cobra and Artistic abruptly closed up shop, and like labelmate Otis Rush, Guy found a new record deal at Chess. His first single for Chess, 1960's "First Time I Met the Blues," was an artistic triumph and a modest commercial success that became one of his signature tunes, but it was also the first chapter in what would prove to be a complicated creative relationship between Guy and label co-founder Leonard Chess, who recognized his talent but didn't appreciate the louder and more expressive aspects of his guitar style. While Guy enjoyed minor successes with outstanding Chess singles such as "Stone Crazy" and "When My Left Eye Jumps," much of his work for the label was as a sideman, lending his talents to sessions for Muddy Waters, Koko Taylor, Howlin' Wolf, Little Walter, and many others. And one of Guy's definitive '60s recordings wasn't even issued by Chess; Guy had been performing occasionally with blues harpist Junior Wells, and Guy and his band backed Wells on the 1965 Delmark release Hoodoo Man Blues, a masterful exercise in the Chicago blues style, with Guy credited as "Friendly Chap" on initial pressings in deference to his contract with Chess.

Chess didn't issue an album of Guy's until the 1967 release of I Left My Blues in San Francisco, and when his contract with the label ran out, he promptly signed with Vanguard, which put out A Man and the Blues in 1968. As a growing number of rock fans were discovering the blues, Guy was finding his stock rising with both traditional blues enthusiasts and younger white audiences, and his recordings for Vanguard gave him more room for the tougher and more aggressive sound that was the trademark of his live shows. (It didn't hurt that Jimi Hendrix acknowledged Guy as an influence and praised his live show in interviews.) At the same time, Guy hadn't forsaken the more measured approach he used with Junior Wells; Buddy and Wells cut an album that also featured Junior Mance on piano for Blue Thumb called Buddy and the Juniors, and in 1972, Eric Clapton partnered with Ahmet Ertegun and Tom Dowd to produce the album Buddy Guy and Junior Wells Play the Blues. In 1974, Guy and Wells played the Montreux Jazz Festival, with Bill Wyman of the Rolling Stones sitting in on bass; the show was later released as a live album, Drinkin' TNT and Smokin' Dynamite, with Wyman credited as producer.

By the end of the '70s, Guy was without an American record deal, and his career took a hit as a result; while he recorded some material for specialist labels in Europe and Japan, and Alligator issued two collections in 1981, Alone Acoustic and Stone Crazy, for the most part Guy supported himself in the '80s by extensive touring and live work, often appearing in Europe where he was more well-respected than in the United States. Despite this, he continued to plug away at the American market, buoyed by interest from guitar buffs who had heard major stars sing his praises; in 1985, Eric Clapton told a reporter for Musician magazine, "Buddy Guy is by far and without a doubt the best guitar player alive...he really changed the course of rock & roll blues," while Vaughan declared, "Without Buddy Guy, there would be no Stevie Ray Vaughan." In 1989, Guy opened his own nightclub in Chicago, Buddy Guy's Legends, where he frequently performed and played host to other top blues acts, and in 1991, after a well-received appearance with Clapton at London's Royal Albert Hall (documented in part on the album 24 Nights), he finally scored an international record deal with the Silvertone label, distributed by BMG. Guy's first album for Silvertone, Damn Right, I've Got the Blues, featured guest appearances by Clapton, Jeff Beck, and Mark Knopfler, and featured fresh versions of several fan favorites as well as a handful of new tunes; it was the Buddy Guy album that finally clicked with record buyers, and became a genuine hit, earning Guy a gold album, as well as a Grammy Award for Best Contemporary Blues Album. Guy wasted no time cutting follow-ups, releasing Feels Like Rain in 1993 and Slippin' In in 1994, both of which racked up solid sales figures and won Guy further Grammy Awards.

In 1993, Guy reunited with Junior Wells on the stage of his Legends club; it would prove to be one of Wells' last live performances, and the show was released in 1998, several months after Wells' passing, on the album Last Time Around: Live at Legends. While most of Guy's work in the late '90s and into the new millennium was the sort of storming Chicago blues that was the basis of his reputation, he also demonstrated he was capable of exploring other avenues, channeling the hypnotic Deep Southern blues of Junior Kimbrough on 2001's Sweet Tea and covering a set of traditional blues classics on acoustic guitar for 2003's Blues Singer. In 2004, Guy won the W.C. Handy Award from the American Blues Foundation for the 23rd time, more than any other artist, while he took home his sixth Grammy Award in 2010 for the album Living Proof. Guy also received the National Medal of the Arts in 2003, and was awarded Kennedy Center Honors in 2012. He was inducted into the Rock and Roll Hall of Fame in 2005, with both Eric Clapton and B.B. King presenting him with his award, and in 2012 he performed a special concert at the White House, where he persuaded President Barack Obama to join him at the vocal mike for a few choruses of "Sweet Home Chicago." Guy continued his late-career revival with the 2012 memoir When I Left Home: My Story and the summer 2013 release of the ambitious, guest star-laden, double-album Rhythm Blues. The record reached number one on Billboard's Top Blues Albums chart and 27 on their Top 200. Two years later, Guy returned with Born to Play Guitar, another album recorded with producer Tom Hambridge, who has helmed the guitarist's albums since 2008's Skin Deep. In 2018, Guy took time off from his busy road schedule to release a studio album, The Blues Is Alive and Well, which featured guest appearances from Keith Richards, Jeff Beck, and Mick Jagger. The album earned Guy the Grammy Award (his eighth) for Best Traditional Blues Album. ~ Mark Deming, Rovi 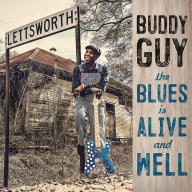 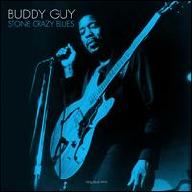 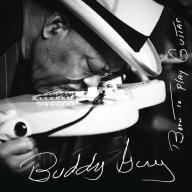 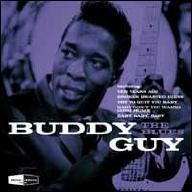 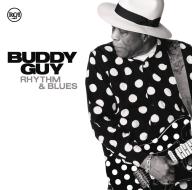 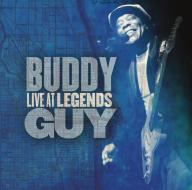 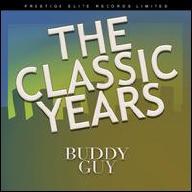 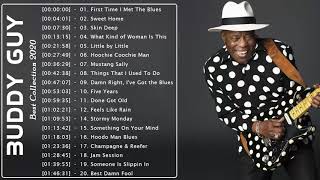 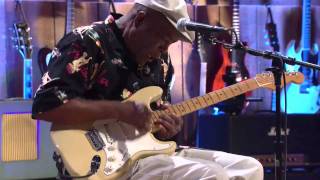 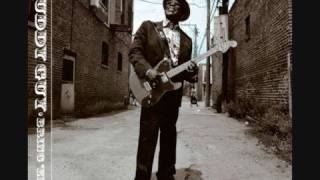 Buddy Guy - What Kind Of Woman Is This 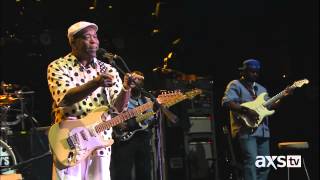 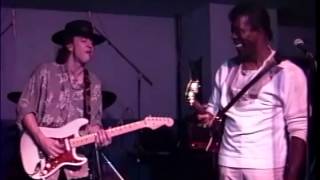 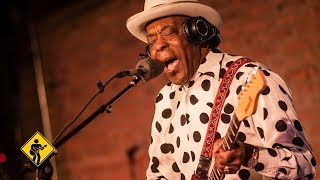 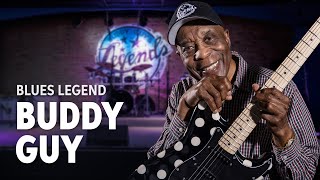 Blues Legend, Buddy Guy on His Incredible Life Story and The Future of Blues
Available here: