Close
Celtic Frost
from Zürich, Switzerland
formed January 1, 1984 (age 38)
Biography
Celtic Frost's impact on the evolution of European heavy metal cannot be overstated. Along with power metal kings Helloween (and to a lesser degree, Mercyful Fate), Frost's enduring influence on Europe's heavy metal landscape is arguably comparable to Metallica's standing in America. Labeled by critics as "avant-garde" for their radical fusion of violent black metal and elements of classical music, the band represented a distinctly European metal perspective. But their history was troubled, their output uneven to say the least, and their ignominious end hardly fitting of their important legacy.

Thomas Gabriel Fischer was the product of a broken home and a less than financially secure upbringing -- a rare predicament in his native Switzerland, but one that instilled in him the burning ambition and outcast mentality usually required in the formative years of a rock star. Fresh out of high school, the teenager was already enamored with the New Wave of British Heavy Metal, and particularly high-energy trios like black metal pioneers Venom and proto-thrashers Raven. Inspired by that movement's D.I.Y. credo, Fischer renamed himself Tom Warrior, and along with bassist Steve Warrior and drummer Bruce Day, formed his first band, Hellhammer, in the fall of 1982. Less than a year later, and though still raw beyond description, the band's demos -- now featuring bassist Martin Eric Ain and drummer Stephen Priestly -- had become surprisingly popular within the underground tape-trading community. In late 1983, start-up German label Noise Records signed them to a contract and included two of their tracks on its first release, a compilation of rising German metal bands appropriately called Death Metal. But Warrior and Ain felt that Hellhammer had already run its course and that the group's extreme nature was too limiting for their increasingly mature compositions. Thus, with their gothic, pseudo-satanic image already coming into focus, in May 1984 they evolved into Celtic Frost.

By October, the trio was in Berlin recording its first album, Morbid Tales, which cemented the group's position as one of Europe's most promising metal acts thanks to its still relatively straightforward -- but nevertheless excellent -- thrash metal attack. The sudden departure of Priestly also proved to be a blessing in disguise, as his replacement, American drummer Reed St. Mark, brought a confidence and musicianship that the group sorely needed. Amazingly, Celtic Frost had yet to play their first concert, so after putting the finishing touches on the Emperor's Return EP, in April 1985 they performed a single warm-up show in their hometown of Zurich, then set out to tour across Germany and Austria.

Now growing from strength to strength, Warrior decided to replace the increasingly unmotivated Ain with bassist Dominic Steiner for their second album, To Mega Therion. But he soon had second thoughts, and Ain returned after the album's completion that fall. Its cover graced by original artwork from acclaimed Swiss artist H.R. Giger (of #Alien fame), the album expanded Celtic Frost's songwriting palette, furthered their growing reputation, and was followed by their first North American performance at the World War Three metal festival in Montreal. After the release of the Tragic Serenades EP in the summer of 1986, the band embarked upon its most extensive tour yet -- first through Europe (including their first visit to England) with Helloween and Grave Digger, then across America with Voivod and Running Wild.

By the end of the year, Celtic Frost were poised to fulfill their seemingly destined promise with a groundbreaking third effort. On To Mega Therion, Warrior had begun experimenting with different musical styles (especially classical music and electronica), leading certain journalists to describe the band's direction as "avant-garde" metal. Released in 1987, Into the Pandemonium would substantiate these claims and then some, introducing an unconventional collision of death metal brutality and symphonic overtones on its way to becoming one of the classic extreme metal albums of all time. Frost's most defining and influential work, it paved the way for the evolution of European death metal as a full-fledged underground phenomenon over the next decade. American guitarist Ron Marks was brought in to flesh out Celtic Frost's live assault, and their subsequent U.K. tour was a resounding success on all fronts.

Now at the peak of their powers, Frost headed for America to undertake their biggest tour ever, but trouble was right around the corner. First the band's high spirits were quickly dampened by personality clashes with new member Marks and, secondly, the tour itself became mired in organizational and financial difficulties almost from day one. By the time it finally concluded in New York City (where the road crew was forced to hold the group's gear hostage in order to get paid by Noise Records), the band was on its last legs. Furious at their record company and completely burnt out from the long months of arduous roadwork, they had had enough: Celtic Frost effectively ceased to exist.

Six months would pass before Warrior got over his disillusionment and was convinced to resurrect Celtic Frost by Swiss guitarist Oliver Amberg. After drafting bassist Curt Victor Bryant and bringing back founding drummer Stephen Priestly, the revamped unit entered Berlin's Sky Trak studios in the summer of 1988 with producer Tony Platt to begin sessions for the now infamous Cold Lake album. Warrior's lingering indifference and lack of commitment to the project allowed Amberg and Platt's commercial tendencies to run wild. In what has since been viewed as one of the most misguided changes in artistic direction in heavy metal history, the duo subverted Frost's ferocious extreme metal roar into a sugar-coated pop-metal whimper. If this weren't bad enough, the group then signed their own death sentence by adopting a glam rock image, complete with teased hair, makeup, and colorful outfits to match! The repercussions were instantaneous and devastating; press and consumers alike burned the band in effigy as an utter sellout, and what was expected to be a triumphant world tour turned into a protracted, embarrassing agony for all involved.

Following this unmitigated disaster, Tom Gabriel Fischer (as he'd once again been calling himself after retiring his Warrior-like qualities) began backpedaling as fast as he could. Assuming control of the group once again, he fired Amberg and lured guitarist Ron Marks back to the fold for 1990's back-to-basics Vanity/Nemesis LP. Marks remained as unreliable as always, though, and would soon exit, forcing Bryant to switch from bass to guitar and opening the door for Martin Eric Ain's return. As for Vanity/Nemesis, it was a respectable semi-return to form that attempted to pick up where Into the Pandemonium had left off and make believe Cold Lake had never happened, but it ultimately couldn't undo the damage done to the band's reputation. After a troubled European tour, Frost planned to return to America for the first time in three years, but when a new recording deal with major label EMI (which had finally severed the band's long-troubled ties to Noise) fell through due to corporate restructuring, Celtic Frost found themselves dropped and, still in shock, decided to call it a day. Their final act was compiling a collection of hits and album leftovers for 1992's Parched with Thirst Am I and Dying -- its bizarre title taken, in typically quirky Frost fashion, from a fourth century Roman poem.

Fischer would avoid the spotlight completely for the next few years before resurfacing in the late '90s with a new band called Apollyon Sun, but when this too ground to a halt amid widespread public indifference, he once again connected with Martin Ain, and quietly set about planning Celtic Frost's resurrection. Working mostly in seclusion and avoiding all external intervention or financing, the duo -- plus new drummer Franco Sesa -- slowly recorded enough material for a comeback album to be titled Monotheist, which they eventually licensed to Century Media and released to much well-deserved fanfare in early 2006 -- just over 20 years after their debut. ~ Eduardo Rivadavia, Rovi 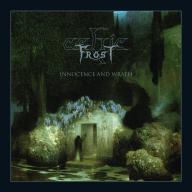 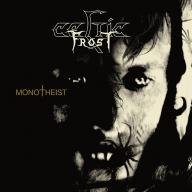 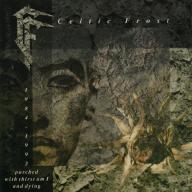 Parched With Thirst Am I and Dying
1997 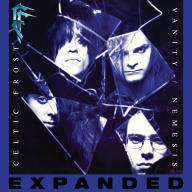 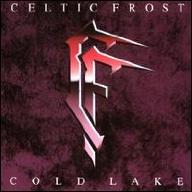 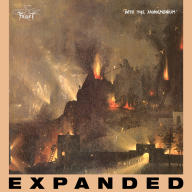 Into The Pandemonium
1987
Videos
Close 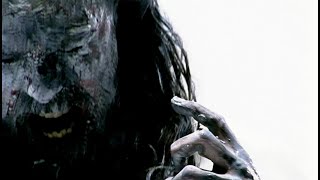 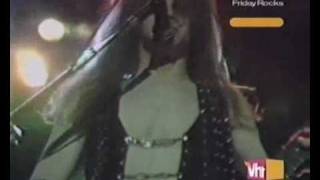 Celtic Frost - Circle of the Tyrants 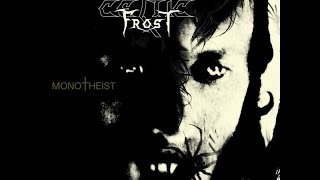 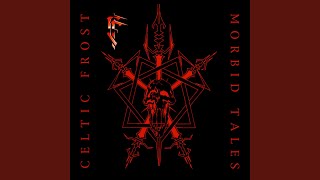 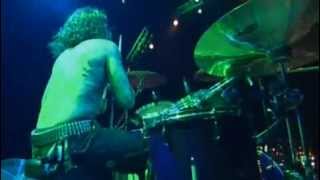