Close
Eddie Kramer
Biography
Unquestionably, one of the most renowned and well-respected producers/engineers in all of rock history is Eddie Kramer. The amount of legendary rock artists he has worked with over his long and illustrious career is staggering -- the Beatles, Jimi Hendrix, Led Zeppelin, and Kiss lead his long list of credits, as well as the original Woodstock soundtrack. Born in South Africa, Kramer studied classical piano, cello, and violin as a child, eventually attending the South African College of Music, and moving to England at the age of 19. Shortly after his arrival in England, Kramer recorded local jazz groups in a home-based studio, plus installed hi-fi equipment as a hobby. By 1964, Kramer was hired by Pye Studios and was immediately assigned to work with such esteemed artists as Sammy Davis Jr., Petula Clark, and the Kinks.

During the mid- to late '60s, Kramer made a name for himself with the rock crowd by engineering classic recordings by Traffic, Small Faces, the Rolling Stones (Beggars Banquet), and the Beatles (their singles All You Need Is Love and Baby You're a Rich Man), becoming a much in-demand studio man in the process -- leading to his fruitful association with Jimi Hendrix. Kramer engineered all four of Hendrix's groundbreaking albums the guitarist issued during his brief career -- 1967's Are You Experienced? and Axis: Bold As Love, 1968's double album Electric Ladyland, and 1970's Band of Gypsys. Along with his production/engineering duties, Kramer also helped Hendrix create and design a custom-built recording studio in New York City, Electric Lady. Although Hendrix wouldn't live to see its completion in the early '70s, Electric Lady almost automatically became one of the world's most popular recording studios.

In addition to his work with Electric Lady, Kramer continued to man the boards for other projects, including the best-selling Woodstock soundtrack, which made Kramer one of the most in-demand producers of live albums by rock artists of the era. He worked on live recordings by Led Zeppelin, Jimi Hendrix, Kiss, John Mayall, the Rolling Stones, Peter Frampton, Joe Cocker, Curtis Mayfield, Santana, David Bowie, and Derek the Dominoes. Add to it several of Led Zeppelin's most enduring albums (Led Zeppelin II, Houses of the Holy, Physical Graffiti, and the motion picture soundtrack The Song Remains the Same), as well as overseeing several posthumous Hendrix collections throughout the remainder of the decade (Cry of Love, Hendrix in the West, War Heroes, among others), and you'd think Kramer's plate was full. But this proved not to be the case.

In 1973, two unknown musicians were owed money from Electric Lady from session work they'd done for the studio. But instead of asking for the money, the duo (Gene Simmons and Paul Stanley) asked if Kramer would be interested in producing their new group's demo tape. Kramer accepted, touching off a relationship with theatrical heavy metallists Kiss that would last throughout the '70s -- resulting in such hard rock classics as their breakthrough Alive, plus Rock and Roll Over, Love Gun, Alive II, Double Platinum, and Ace Frehley's 1978 solo album (in a strange twist of fate, Kramer chose to work on Kiss' Alive release instead of on the debut of another up-and-coming rock outfit, Boston).

Kramer spent the '80s producing and engineering primarily heavy metal acts (Fastway, Anthrax, Alcatrazz, Raven, Loudness, Triumph, Whitesnake, Ace Frehley's post-Kiss solo outfit, Frehley's Comet, etc.), with varying degrees of success. But the '90s saw Kramer once again getting involved with Kiss for their Alive III set, as well as numerous Hendrix projects (once Hendrix's family got the rights back to his music, Kramer was put back in control of overseeing subsequent releases) -- including the tribute albums Stone Free and In From the Storm, plus such further archival releases as First Rays of the New Rising Sun, Live at the Fillmore East, Live at Woodstock, BBC Sessions, and the four-disc box set, The Jimi Hendrix Experience. During this time, Kramer also co-authored the Hendrix-related books -Hendrix: Setting the Record Straight and -Jimi Hendrix Sessions.

Eddie Kramer continues to engineer/produce artists (including Buddy Guy's Grammy-winning 1995 release, Slippin' In) Kramer has also issued a three and a half hour instructional video, titled #Adventures in Modern Recording, and appeared in the 1997 Hendrix documentary #The Making of Electric Ladyland. ~ Greg Prato, Rovi 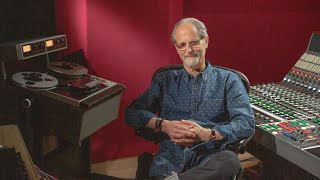 Eddie Kramer's story behind "All Along The Watchtower" by Jimi Hendrix 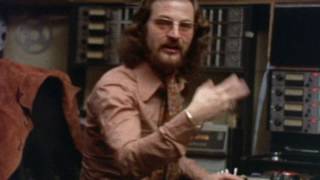 The Production of "Dolly Dagger" with Eddie Kramer 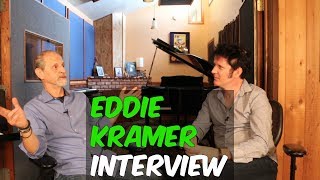 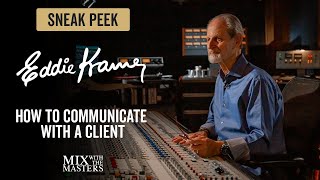 Eddie Kramer on how to communicate with a client 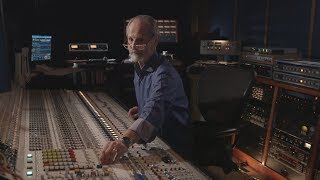 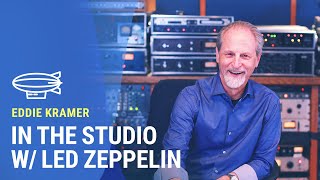 In the Studio with Zeppelin: Eddie Kramer Mixing Masterclass 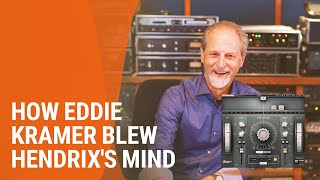