Close
Peetie Wheatstraw
from Ripley, TN
December 21, 1902 - December 21, 1941 (age 39)
Biography
Peetie Wheatstraw was the name adopted by singer William Bunch, taking it from Black American folklore. According to author Ralph Ellison, who made use of the Wheatstraw legend to model characters in his novels -Invisible Man and -Juneteenth, "Peetie Wheatstraw" was the evil half of a twin personality whose challenge was invoked at the start of a pool game. He was "the Devil's Son-In-Law" or "the High Sheriff of Hell," in search of his other half, the "Lord God Stingerroy" to shoot him a game. Nothing is known of the early life of William Bunch, other than that he was born in Ripley, Tennessee and raised in Cotton Plant, Arkansas. In 1929, he arrived in East St. Louis, already using the name Peetie Wheatstraw. Allegedly, as Wheatstraw, Bunch was also spreading the rumor that he had been to the "crossroads" and had sold his soul to the Prince of Darkness in exchange for success as a musician.

Without regard for the validity of Wheatstraw's claims, this self-promotion paid off in short order. Peetie Wheatstraw soon became a popular performer in East St. Louis and his fame quickly spread to Chicago. At a time when most record companies were cutting their entire blues rosters in order to survive the depression, Peetie Wheatstraw suddenly became a hot item. Wheatstraw began his recording career singing vocal duets with the unknown "Neckbones" (possibly J.D. Short) for ARC on September 13, 1930 and continued recording on his own into the early part of 1931. After an isolated session for Bluebird in September, 1931, Wheatstraw returned to ARC, and then moved to Decca in 1934, where the bulk of his best recordings were made. Peetie Wheatstraw recorded in every year of the 1930s save 1933, ultimately producing 175 sides in all with only one rejection, an enormous total for a blues artist in the pre-war period. This figure does not include recordings made by Wheatstraw sitting in on records made by his frequent partner, Kokomo Arnold, or ones made with Amos Easton, a.k.a. Bumble Bee Slim.

In the only known photograph of Peetie Wheatstraw, he is shown holding a guitar; curious, as he was a primarily a piano player, although he may have played his own guitar on a couple of recording dates. On his records Wheatstraw usually required a guitarist to play with him, and had many excellent ones to choose from, including Kokomo Arnold, Lonnie Johnson, Charlie Jordan, Charlie McCoy, and Teddy Bunn, in addition to pianist Champion Jack Dupree. On some of his last dates, Peetie Wheatstraw recorded within a jazz inspired framework, collaborating with Lil Armstrong and trumpeter Jonah Jones. His true strength was not so much in terms of instrumental ability as it was his singing and the varied lyrical content of his songs, which dealt with topics such as loose women, alcohol, supernaturalism, gambling, suicide and murder. Robert Johnson cribbed so many lyrical ideas from the work of Peetie Wheatstraw that it's not even worth going into specific examples of that derivation here.

The sheer size of Peetie Wheatstraw's recorded output has worked against his reputation. Some blues experts have expressed the opinion that Wheatstraw's recordings are limited stylistically, lack variety and tend towards repetition. One hallmark of his style was the use of pet phrases for purposes of punctuation, most typically "Oh, well, well" in third verses of songs. On the contrary, it would seem that anyone who was thinking of formalizing aspects of blues songwriting in the 1930s would be hailed a harbinger of things to come, rather than blamed for a lack of imagination. In the later '30s, Peetie Wheatstraw's recording sessions were being held once every two or three months and consisted of six to eight songs per date, so he had to develop formulas in order to keep his content fresh. That Wheatstraw did so successfully was something that affected nearly every blues musician within hearing distance of one of his records. He was overwhelmingly popular throughout the 1930s, and he is credited in some quarters with being the artist who carried the blues from its lowly status as rural "devil's music" into the cities where, in time, it would grow, thrive and change to suit the needs of a new, urban audience.

Peetie Wheatstraw would not personally live to witness these future changes. Since his death, researchers have probed arduously in an attempt get at more information about him, interviewing his acquaintances and reviewing civic records. But even more than sixty years after his death practically nothing substantive is known about him or his life, despite his ambitious recording schedule and tremendous popularity. For someone cultivating the legend of a deal with the devil, Wheatstraw's death was eerily appropriate -- celebrating his 39th birthday, Wheatstraw and some friends decided to drive to the local market to pick up some liquor, and on their way out they tried to beat a railroad train that was coming down the tracks at full speed. Needless to say, they didn't make it. ~ Uncle Dave Lewis, Rovi 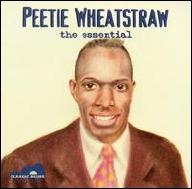 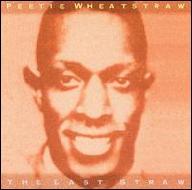 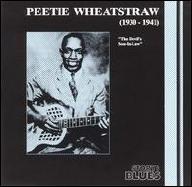 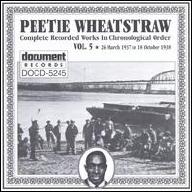 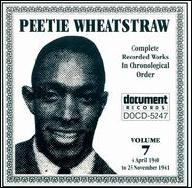 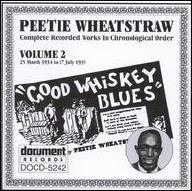 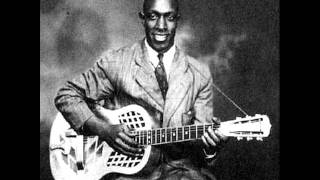 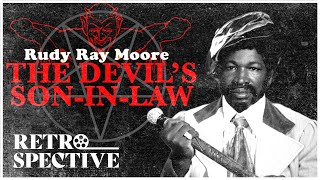 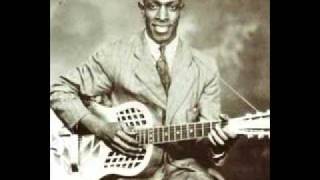 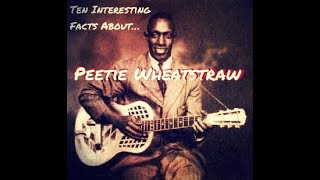 Ten Interesting Facts About Peetie Wheatstraw - One of the best-selling Blues artists of the 1930s. 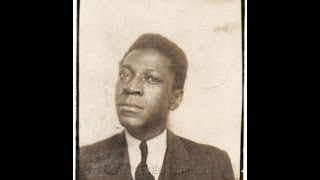 Peetie Wheatstraw Crazy With The Blues (1937) 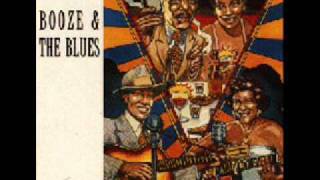