Close
Holly Near
from Ukiah, CA
June 6, 1949 (age 73)
Biography
Vocalist, songwriter, actress, and activist Holly Near was a major figure in the rise of the women's music movement in the '70s, and has been a proud champion of using music as a medium for social change. With a background in both music and theater, Near enjoyed success as an actress in the early '70s before changing her focus to songwriting, making the most of her clear voice and knack for compelling melodies. Founding her own label, Near's debut album, 1973's Hang in There, focused largely on the War in Vietnam, while feminist themes were strongly felt on much of her work of the '70s. 1978's Imagine My Surprise was an outspoken celebration of the LGBTQ+ community before it had that name, and she explored both the personal and political on 1981's Fire in the Rain. In the '80s and '90s, Near sang with a purpose, whether on her own or in collaboration with artists such as folk icon Ronnie Gilbert (1983's Lifeline) or the Chilean ensemble Inti-Illimani (1984's Sing to Me the Dream), and she flirted with mainstream pop sounds on 1987's Don't Hold Back. While activism took up more of Near's time than music in the 2000s, she continued to make statements in song on 2012's ambitious Peace Becomes You and the timely 2018.

Holly Near was born in Ukiah, California on June 6, 1949 and spent much of her childhood living with her family on a ranch in nearby Potter Valley. She grew up in a family that encouraged creativity, and she began performing in public at the age of ten, singing in a talent contest at a Veterans of Foreign Wars hall. In high school, Near developed an interest in acting and was active in school theater; she also made her first foray into activism when she joined a student group dedicating to changing the campus dress code. In 1965, Near joined a folk singing group with three boys modeling themselves after the Kingston Trio and the Weavers; they called themselves the Freedom Singers, unaware of the group with the same name founded by members of the civil rights group the Student Non-Violent Coordinating Committee. In 1967, Near completed high school and enrolled at UCLA, where she remained active in theater. While playing the female lead in a production of Guys and Dolls, Near discovered she had nodules on her vocal chords, and started taking voice lessons to better use her instrument. In 1969, she joined the anti-war group Another Mother for Peace, and began performing material protesting American involvement in the Vietnam war with her sister Timothy Near. In 1969, Near landed a role in the movie Angel, Angel Down We Go, and was soon busy working in movies and TV, as well as appearing in the Broadway production of the rock musical Hair. She was also a member of a short-lived musical group, 1st National Nothing, who cut an album for Columbia, 1970's If You Sit Real Still and Hold My Hand, You Will Hear Absolutely Nothing, before breaking up. In 1971, Near joined the cast of Free the Army, an activist entertainment group founded by Jane Fonda that performed off-base for soldiers in the United States and in the Pacific. Working with the FTA group helped focus Near's ideas about the importance of music in activism and the rising women's movement. Near started writing songs that reflected her beliefs and recorded an album; she formed her own label to release the recordings, Redwood Records, which she conceived as a platform for politically conscious artists from the United States and abroad. Near's debut album, Hang in There, would be Redwood's debut release in 1973, with A Live Album following in 1974.

While feminism had played a major role in Near's music from her days with Free the Army, she began adding an emphasis on the burgeoning Gay Rights movement, and in 1976, she came out as a lesbian, and revealed she was in a relationship with fellow women's music pioneer Cris Williamson. Near performed at the first Michigan Womyn's Music Festival, which would become a major annual event celebrating the rights and creativity of women. As Near's profile rose, Redwood Records enjoyed greater success, and began releasing records by other artists, including Ferron, Sweet Honey in the Rock, and Judy Small. Near's 1978 album Imagine My Surprise found her writing openly about her sexuality, and was named Best Independent Album of the Year by the Bay Area Music Awards. For 1981's Fire in the Rain, she worked with producer June Millington, who had been a member of the groundbreaking all-female rock band Fanny; that same year, she was also profiled in People magazine, becoming one of the first out lesbians to be featured in a mainstream entertainment publication. Dividing her time between music and work with anti-nuke organizations, Near found time to release Speed of Light in 1982. For 1983's Lifeline, she collaborated with one of her early inspirations, Ronnie Gilbert of the Weavers, and the two supported the release with a joint concert tour; they would hit the road together again in 1984 for a Defeat Reagan Tour, and Near and Gilbert would team with Pete Seeger and Arlo Guthrie for an album and series of concerts under the name HARP. 1984 also brought another creative collaboration when Near recorded the album Watch Out! with accompaniment from multi-instrumentalist John McCutcheon.

In 1984, Near staged a concert tour with the Chilean leftist folk ensemble Inti-Illimani, and the tour spawned an album, Sing to Me the Dream. Near was nominated for 1985's Woman of the Year honors by Ms. magazine, while she also hosted the first Redwood Records Music Festival. Near and Ronnie Gilbert reunited for another collaborative album, 1986's Singing with You, the same year the Women's Foundation presented her with their "Woman of Note" award for her career as a musical activist. 1987's Don't Hold Back found Near dabbling in pop-oriented arrangements and production, and included a guest appearance from Kenny Loggins on "The Promise (How Can Anybody Know)." Near experienced a very special honor on July 7, 1989, when the mayor of San Francisco, Art Agnos, proclaimed it Holly Near Day in the city; that year, the album Sky Dances was released. Near's next album, Singer in the Storm, was a live album with a guest appearance by Melissa Etheridge on guitar, released by Chameleon Records, making it her first album for a label other than Redwood.

Near wrote and staged a one-woman show, Fire in the Rain, that debuted in Los Angeles in 1993. She also staged the show in New York City and San Francisco, the latter production receiving an Outstanding Achievement Award from the Bay Area Theater Critics Circle. Near released an album of musical highlights from the show in 1993, which proved to be one of her last releases for Redwood, which folded in the mid-'90s. Near and Ronnie Gilbert staged another concert tour, which was documented on the 1996 album This Train Still Runs, issued by Abbe Alice Music. In 1997, Near founded a new label, Calico Tracks Music, to release her recordings, and the label was kicked off with With a Song in My Heart, in which she interpreted love songs of the '30s and '40s. 2000's Simply Love: The Women's Music Collection brought together feminist-themed songs from Near's catalog from 1974 to the present. Later in the year, Near released Edge, a strongly political album which featured eight fresh original songs alongside five relevant covers. Appleseed Recordings, a folk label that had reissued some of Near's out-of-print Redwood recordings, issued another rabble-rousing set, 2001's Early Warnings, which was dominated by songs she wrote in the '80s in the midst of the AIDS crisis, the presidency of Ronald Reagan, and the rise of the new conservative movement. Appleseed also issued HARP: A Time to Sing in 2001, which presented a full-length Near, Gilbert, Guthrie and Seeger performance from 1984. Calico Tracks issued more thematic collections drawn from Near's back catalog in 2002, And Still We Sing: The Outspoken Collection and Crushed: The Love Song Collection. An expanded reissue of Lifeline was brought out by Appleseed that same year.

In 2003, Near and her longtime friend and former partner Cris Williamson went into the studio to record new songs and revisit some of their classics; the result was the album Cris and Holly. From the 2000s and onward, Near focused more of her time and energy on activism, remaining a champion for human rights and social justice, but she still found time to perform and record. 2006's Show Up was an album that focused on both personal and political material, and 2009's We Came to Sing! found her collaborating with the vocal group Emma's Revolution. 2012's Peace Becomes You was an ambitious 29-song set that brought together songs of conscience from her own songbook as well as material penned by artists as diverse as Irving Berlin, Jacques Brel, Keb' Mo', and Gnarls Barkley. Her album 2018, released that very year, was a suitably timely effort that found her confronting such topics as domestic violence, bullying in schools, and Puerto Rico in the aftermath of Hurricane Maria. ~ Mark Deming, Rovi 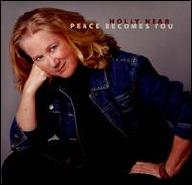 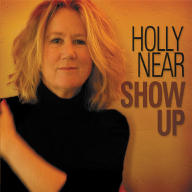 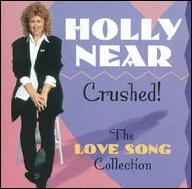 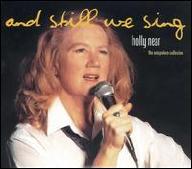 And Still We Sing: The Outspoken Collection
2002 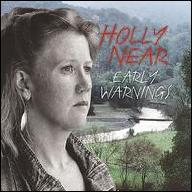 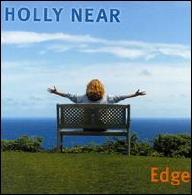 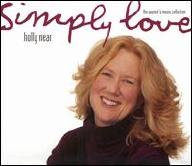 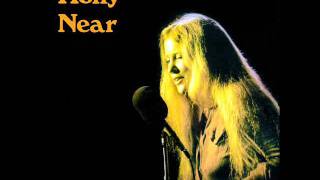 Holly Near - It Could Have Been Me (Live) 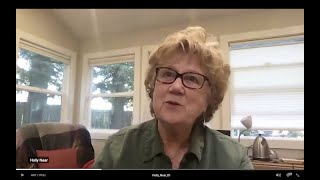 Behind The Curtain: Holly Near 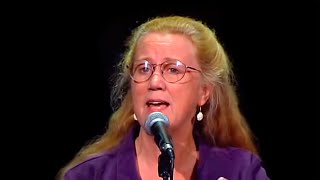 Holly Near Sings "The Souls Are Coming Back" | Bioneers 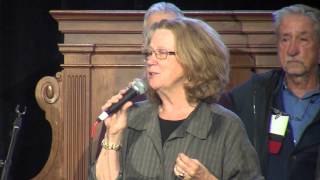 Holly Near: "Singing For Our Lives" 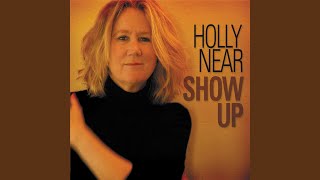 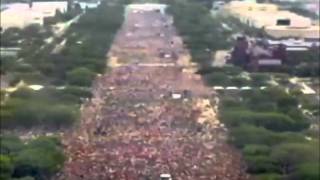 Holly Near Singing for Our Lives 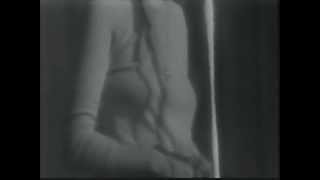