Close
The Modern Jazz Quartet
from New York, NY
formed January 1, 1952 (age 70)
Biography
With their cool, group-oriented sound, bop-inflected improvisations, and classical chamber aesthetics, the Modern Jazz Quartet rose to prominence in the '50s, expanding the jazz paradigm and bridging the gap between smoky jazz clubs and prestigious concert halls. Led by pianist John Lewis, the MJQ initially featured vibraphonist Milt Jackson, bassist Ray Brown, and drummer Kenny Clarke (joining later were Percy Heath and Connie Kay). One of the first of the classical-influenced chamber jazz ensembles, the quartet distinguished themselves with textured group interplay and virtuosic improvisational dexterity, skills carried over from the members' previous work with such lauded jazz innovators as Dizzy Gillespie, Charlie Parker, and Thelonious Monk. The quartet issued a number of critically acclaimed albums and spawned a handful of classic jazz standards, including their signature 1952 song "Bag's Groove" ("Bags" being Jackson's nickname), "Vendome" (originally from 1954's MJQ), and "Django" (from 1956's Django). Never straying from their high standards, they enjoyed a four-decade-plus career that found them exploring an array of settings, including collaborations with saxophonist Sonny Rollins and Brazilian guitarist Laurindo Almeida, large ensemble recordings like 1960's The Modern Jazz Quartet and Orchestra, and forays into soul jazz and other global traditions.

For the entirety of the Modern Jazz Quartet's career, they were led by pianist John Lewis. Hailing from La Grange, Illinois, Lewis played with a sound that combined his love of classical music, especially Bach, with his deep-rooted love of the blues, bebop, and swing. Highly intellectual, he double-majored in Music and Anthropology at the University of New Mexico, and later earned his master's degree from the Manhattan School of Music. He and drummer Kenny Clarke first met in the Army in 1944 while they were stationed in France during World War II.

A Pittsburgh native, Clarke had already distinguished himself as a gifted and innovative drummer by the time met Lewis, having played with artists like Roy Eldridge, Benny Carter, and Coleman Hawkins. He had also fully developed his distinctive style, which found him shifting the time-keeping from the bass drum to the ride cymbal, an approach that would inform much of the MJQ's sound and eventually become widely adopted within the genre at large. Following their time together in the Army, Lewis and Clarke reconnected in New York City where Clarke was playing with trumpeter Dizzy Gillespie's Orchestra. Upon Clarke's recommendation, Lewis joined the ensemble, taking over for outgoing pianist Thelonious Monk.

Along with Clarke and Lewis, Gillespie's rhythm section also included vibraphonist Milt Jackson. Nicknamed "Bags," Jackson had come up in Detroit where he started out on guitar before switching to the vibes. Discovered by Gillespie, he quickly built upon the work of his vibraphone predecessors Lionel Hampton and Red Norvo, displaying deft bebop improvisational skill and warm, harmonic sensitivity, both hallmarks of the MJQ sound.

Rounding out the Gillespie rhythm section was bassist Ray Brown. Also a Pittsburgh native like Clarke, Brown played with a bevy of local and touring groups while growing up, including pianist Hank Jones. It was through his friendship with Jones that he joined Gillespie's group upon his arrival in New York City in 1945, and was with the trumpeter when Lewis, Jackson, and Clarke all joined the band.

At Gillespie's request, the rhythm section began playing several songs each night as a quartet between the big band's sets. Recognizing their own chemistry and potential, they began seeking out their own work. They initially billed themselves as the Milt Jackson Quartet to appease promoters looking to book a marquee name. They captured the group's sound on several early Jackson sessions, including a 1951 date for Gillespie's Dee Gee Records and 1951's Milt Jackson on Blue Note, which also featured saxophonist Lou Donaldson. Another album, Modern Jazz Quartet, arrived on Savoy in 1952 and found Brown splitting the session with fellow bassist and Gillespie alum Percy Heath. Around the same time, Brown left the band to focus on his work with his then-wife singer Ella Fitzgerald. He eventually joined pianist Oscar Peterson's Trio, and finished his career in Los Angeles as one of the most celebrated bassists in jazz history. He died in his sleep in 2002.

With Brown's departure, Jimmy Heath joined the MJQ on the heels of his 1952 session with the band. Raised in Philadelphia alongside his equally talented siblings, saxophonist Jimmy Heath and drummer Albert Tootie Heath, Percy Heath had studied at Philadelphia's Granoff School of Music and played with artists like Red Garland, Howard McGhee, Charlie Parker, and Gillespie before joining the quartet. Moving forward as a unit, the group, under Lewis' guidance, adopted a chamber music style, wearing matching tuxedos and largely eschewing small jazz clubs in favor of theaters and prestigious concert venues. The formalized aesthetic translated even more strongly to the group's music, as they began playing group arrangements influenced by Lewis' classical background. Throughout the '50s, they issued a number of highly regarded albums including a 1953 date with Sonny Rollins and 1954's MJQ, both of which found them tackling bop and swing standards, as well as originals like Lewis' "Django" and Jackson's "Bag's Groove," the latter of which soon became their anthem.

In 1955, Clarke left the band and moved to Paris where he co-led the Kenny Clarke-Francy Boland Big Band until his death from a heart attack in 1985. He was replaced by drummer Connie Kay. Born in Tuckahoe, New York, Kay was a largely self-taught yet still deftly understated and skillful drummer, with a résumé featuring collaborations with Lester Young, Charlie Parker, and Miles Davis. He made his recorded debut with the quartet on 1955's Concorde, of which the title track was one of Lewis' first fugue-influenced compositions. More albums followed including 1956's Fontessa, 1957's The Modern Jazz Quartet, and 1959's Odds Against Tomorrow.

During the '60s, the MJQ further expanded their sound, issuing a bevy of albums on Atlantic including 1962's Lonely Woman, which featured their take on the Ornette Coleman title track. They also paired with Brazilian guitarist Laurindo Almeida on 1964's Collaboration, issued the 1965 big-band album Jazz Dialogues, and paired with the acclaimed vocal ensemble The Swingle Singers for 1966's Place Vendome. There were also collaborations with Gunther Schuller, singer Diahann Carroll, saxophonist Sonny Rollins, and the Beaux Arts String Quartet, among others.

The group continued to tour often throughout the '70s, a period which also found them expanding their sound in reaction to the growing influence of funk, soul, and global traditions; sounds which they explored on 1971's Plastic Dreams and 1972's The Legendary Profile. However, in 1974, Milt Jackson left the group, citing their constant touring and his desire to seek out other improvisational platforms. Following a tour and farewell concert at New York's Avery Fisher Hall documented on The Complete Last Concert, the group decided to call it quits.

Over the next few years, the members of the MJQ have issued their own albums and recorded as sidemen with others. In 1981, the quartet reconvened for a one-off concert released that year as Reunion at Budokan. Their chemistry was clearly intact and led to an extended reunion run. They celebrated their 30th anniversary the following year with Together Again: Live at the Montreux Jazz Festival '82, and solidified their creative partnership with 1984's studio date Echoes. More well-regarded albums followed, including 1987's Three Windows with the New York Chamber Symphony, 1988's For Ellington, and 1989's Western-themed Rose of the Rio Gande.

The group continued to perform through the early '90s, even as Connie Kay's health began to fade following a stroke. In 1993, they issued their final album MJQ Friends: A 40th Anniversary Celebration, which found drummer Mickey Roker sitting in for Kay on several tracks. Also featured were guest appearances by Bobby McFerrin, Phil Woods, Wynton Marsalis, Harry Sweets Edison, and others. Following Kay's death from a heart attack in 1994, Albert Tootie Heath briefly took over the drum chair before the group discreetly parted ways for a final time. In the years following the group's end, the members stayed active touring and issuing their own albums. Milt Jackson died in 1999 after a battle with liver cancer. Cancer also took both John Lewis in 2001 and Percy Heath in 2005. ~ Matt Collar, Rovi 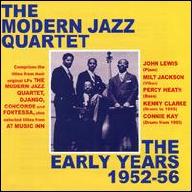 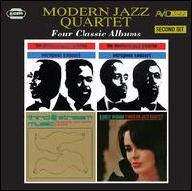 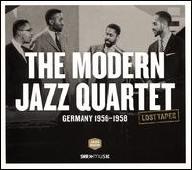 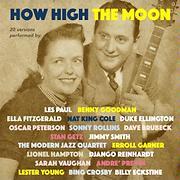 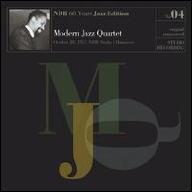 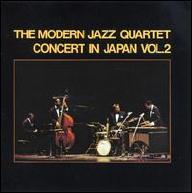 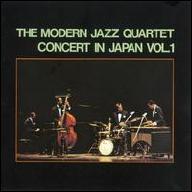 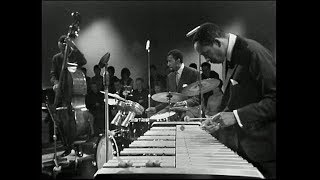 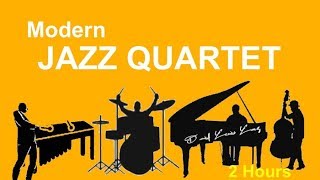 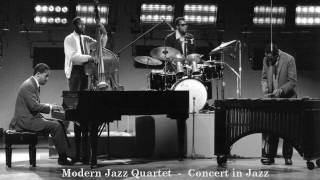 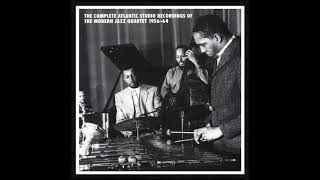 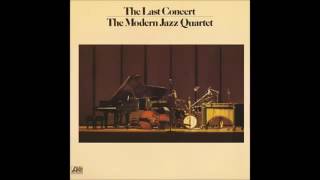 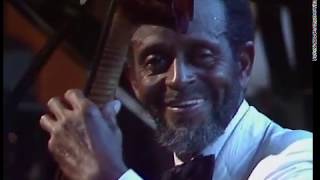 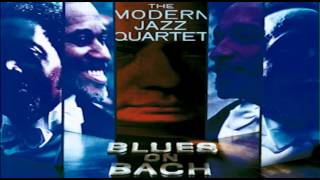 The Modern Jazz Quartet - Blues In A Minor
Available here: