Close
Sam Lanin
from Russia
September 4, 1891 - May 5, 1977 (age 85)
Biography
Not everyone who had a profound effect on the world of music was necessarily a musician, or had to be a particularly good one -- sometimes it was just a matter of recognizing the latter quality in others and enabling them to do what they did best. Sam Lanin was a musician, but it was not in that capacity that he made his greatest contribution to music -- oh, he played drums here and there in some recording sessions, but that was as far he got generating music himself in a way that lasted beyond a particular performance.

He was a band director, an organizer of performing and recording groups, who was as active in that field as anyone in music during the 1920s -- his timing was especially significant because the '20s were, for the majority of Americans (except in the farm belt) a time of unimpeded (and, as it turned out, in major part illusory) prosperity, when entertainment was booming. It was no coincidence that the 1920s saw the organizing of the major film studios in something close to their final forms, the birth of commercial radio, and the massive growth of RCA Victor -- the first modern incarnation of one of the labels that was to dominate recorded music for much of the century -- as well as the spawning of dozens upon dozens of rival recording outfits, and a golden age in American theater. It wasn't easy to get a drink legally, but every other kind of diversion and entertainment was growing as never before.

Samuel Lanin was one of ten children of Benjamin and Mary Lanin, Jewish immigrants from Russia who arrived in the United States in the early 1890s and settled in Philadelphia. The whole family was musical -- Sam studied the clarinet and violin as a boy, and his brothers Jimmy, Howard, and Lester also gravitated toward music and eventually became bandleaders, with Lester's fame lasting into the 1990s, a hundred years after Sam's birth. For his part, Sam got good enough so that in 1912, at age 21, he joined Victor Herbert's orchestra. And his musical ability was sufficient to keep him based stateside during World War I despite his joining the United States Navy as a bandsman. Lanin returned to Philadelphia after the war and subsequently moved to New York City. He was employed there in a newly founded institution, the Roseland Ballroom, at the end of 1918.

Lanin was precisely the right man in the right place at the right time. Roseland, which called itself "The Home of Refined Dancing," captured the hearts and fancy of a middle-class and working-class public that was only too eager to forget America's two-year involvement with what was then called the World War, as well as the two years longer that Europe had been fighting; the public, except for President Wilson and a minority of dedicated humanitarians and forward-thinking people, wanted little or no active role in the aftermath or the clean-up of the wreckage, human or otherwise, beyond sending food and aid to Europe.

Rather, the public wanted to dance -- and relax, and enjoy the fiction of a job well done, even if winning the war was only half the job (and the second half was well-nigh impossible to do, owing to the politics of the era on both sides of the Atlantic). The Republicans of 1920 captured the mood in a phrase, a "return to normalcy" -- no one knew what "normalcy" was; indeed, the word may not even have existed before that campaign, but they knew that it involved lots of fun, and spending money on anything (except alcoholic beverages, which were soon to be banned) that helped in the making of the fun without worrying about rationing or social ills or other concerns. Roseland was an instant success, and it was only a short time before its name had sufficient cachet to justify recordings exploiting it. By early 1920, Lanin had organized and was leading an ensemble called the Roseland Orchestra -- carrying his name in front of it -- in a recording session for the Columbia Gramophone Company (distant predecessor to Columbia Records). He went on to record with numerous ensembles, using such diverse names as Lanin's Famous Players, Lanin's Southern Serenaders, Lanin's Arkansaw Travelers, and others -- most carried his name but some didn't, and Lanin was a downright ubiquitous presence in the studio across the 1920s, providing or leading sessions by groups whose names and sounds fed the ever-growing public appetite for dance music, much of it jazz-inspired if not all strictly "jazz" in the technical sense; other names with which he was associated behind the scenes included Ladd's Black Aces and Bailey's Lucky Seven, and he apparently even subbed for his own brother Howard at a recording session credited to the latter by the Benjamin Franklin Hotel Orchestra on Victor. Pianist Phil Napoleon was in most of Lanin's groups, and others whose names turn up regularly include Miff Mole and Jules Levy, Jr., with jazz notables such as Frank Trumbauer moving in and out from session to session; although he did play some percussion on some early recordings, and even added a vocal to Shake It and Break It by Ladd's Black Aces, Lanin's basic role was as leader and organizer.

One reason that Lanin was so busy involved the number of different hats he wore during this era. In addition to his employment at Roseland -- and he led one of the three top orchestras playing at the ballroom, in addition to any recording he did with groups bearing the Roseland name -- he was also employed by the Starr Piano Company and their Gannett label, where he seems to have been in charge of most of their dance recording sessions. But he also provided groups to Brunswick during the mid-'20s.

Lanin only added to his fame in 1923 when he embraced the new medium of radio -- he was among the very first major bandleaders to be heard over the air, leading his Roseland orchestra in a regular Monday night gig starting that year. He soon picked up a sponsored broadcast, courtesy of Bristol-Mayers on behalf of their Ipana toothpaste -- the group he led might well have been called Sam Lanin's Troubadours, and there was such an outfit recording in the 1930s, but in return for Bristol-Meyers' sponsorship in the 1920s they were the Ipana Troubadours, a name that stuck. By the spring of 1925, he'd outgrown anything that Roseland could do for him, and he soon became a fixture on the radio and in the recording studio -- in addition to the Ipana Troubadours, he led outfits with names such as Lanin's Arkansaw Travelers, Lanin's Southern Serenaders, Lanin's Red Heads (who, led by Red Nichols, subsequently metamorphosed into the Five Pennies), Lanin's Jazz Band, Lanin's Arcadians, and others. Many of these credited him up front on their records in this manner, while these and many others also included a credit of "S.C. Lanin -- director" or some such reference, while others that never mentioned him also were product of his work. It will probably never be known how many different groups and sessions he led and organized -- among the non-"labeled" Lanin groups were the Broadway Bell-Hops and the Westerners, as well as Ladd's Black Aces, but the actual list would be far longer, based on the sheer volume of his work. He was among the most popular bandleaders and organizers of the 1920s, specializing in dance music with a jazz base, a bit like Fred Rich.

And like Rich, his reputation beyond the 1920s and early '30s was carried forward by the names of the musicians who passed through his employ. Among the most celebrated of Lanin alumni, in addition to Phil Napoleon, Miff Mole, Red Nichols, and Jules Levy, Jr., were Jimmy Dorsey, Tommy Dorsey, Manny Klein, Jimmy McPartland, Bix Beiderbecke, Eddie Lang, Bunny Berigan, and Nick Lucas. The biggest name with which he ever worked at a formative career stage, however, was Bing Crosby -- then working for Paul Whiteman -- who was on hand for a couple of Lanin sessions in 1928 and 1929, with the Ipana Troubadours and Sam Lanin's Famous Players.

With his ear for talent and the public's taste, Lanin might have gone on for decades, but the business signs weren't that favorable to him as the 1930s opened. The stock market crash in October of 1929 was the opening signal of what became the Great Depression, and by 1930 the good times as they'd been known were definitely over, not just for a rapidly (and alarmingly) increasing portion of the public, but also for the record industry and even radio, though it did fare better than the recording business. The Bristol-Meyers sponsorship disappeared in 1931 and with it Lanin's radio show and, not long after -- as soon as contracts had run their course -- the Ipana Troubadours name. He went on to record with Sam Lanin's Troubadours, Sam Lanin's Dance Ensemble, and other groups, often anonymously, and led the Pillsbury Orchestra in broadcasts for a year during the early '30s. But by the mid-'30s he was reduced to cutting transcription discs, a usually thankless and anonymous task that paid bills but earned little glory or significant amounts of money. His brand of dance music still had an audience, although the advent of the swing era increasingly pulled that audience toward bigger ensembles and more jazz-focused work, while personalities such as an up-and-coming young Ozzie Nelson -- who not only led a band, but also sang -- got an ever-larger share of what top hotel work and radio broadcasts that there were.

Lanin probably could have gone the same route that Fred Rich did, to an executive position in radio or with one of the movie studios, but he didn't have to. Despite the market crash, he'd apparently held onto a lot of the money he'd made in the teens and 1920s, and was able to walk away from the business in the late '30s more-than-comfortably well off. He was largely forgotten, except by collectors, jazz history buffs, and nostalgia mavens across the decades that followed -- ironically enough, this was a period in which his younger brother Lester, who'd begun emerging to fame a decade after Sam in somewhat different circles, achieved a following leading the same kind of dance bands with which Sam had first made his name; of course, by the 1950s, what Lester was doing was considerably more nostalgia-oriented, whereas Sam had been on the cutting edge of popular music 30 years before.

Lanin passed away in Florida in 1977, four decades out of the music business, but in the 1980s and 1990s, select sides of his work started reappearing on compact disc. In 2000, Lanin received something of his long overdue recognition from author Tim Gracyk in the book -Popular American Recording Pioneers 1895-1925, which probably contains the fullest account of his career. And in more recent times some of Lanin's sides with the likes of Frank Trumbauer and Miff Mole have even been honored with reissues by Mosaic Records, the Rolls-Royce of jazz reissue labels. ~ Bruce Eder, Rovi 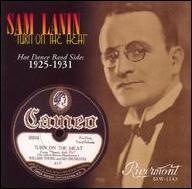 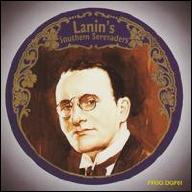 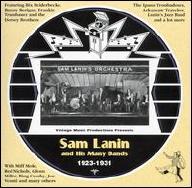 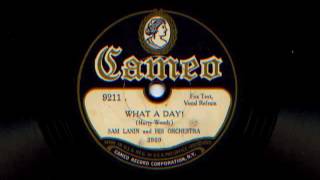 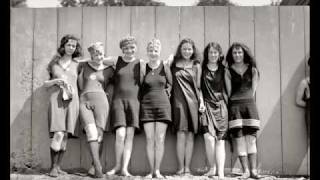 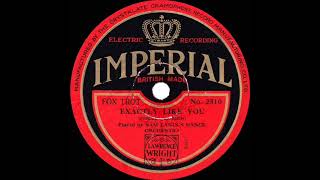 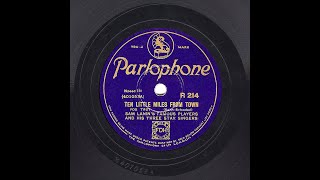 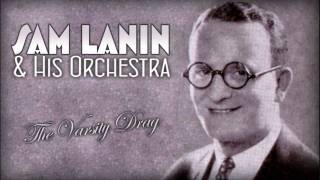 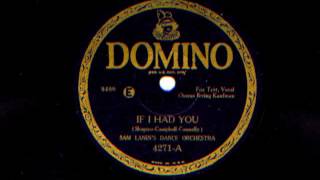 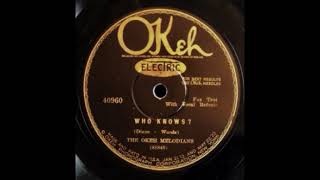 Who Knows? by Sam Lanin and His Orchestra, 1927
Available here: