Close
Buddy Moss
from Jewell, GA
January 16, 1914 - October 19, 1984 (age 70)
Biography
Eugene Buddy Moss was, in the estimation of many blues scholars, the most influential East Coast blues guitarist to record in the period between Blind Blake's final sessions in 1932 and Blind Boy Fuller's debut in 1935. A younger contemporary of Blind Willie McTell and Curley Weaver, Moss was part of a near-legendary coterie of Atlanta bluesmen, and one of the few of his era lucky enough to work into the blues revival of the '60s and '70s. A guitarist of uncommon skill and dexterity, he was a musical disciple of Blind Blake, and may well have served as an influence on Piedmont-style guitarist Blind Boy Fuller. Although his career was halted in 1935 by a six-year jail term, and then by the Second World War, he lived long enough to be rediscovered in the '60s, when he revealed a talent undamaged by time or adversity.

Moss was one of 12 children born to a sharecropper in Jewel, a town in Warren County, Georgia, midway between Atlanta and Augusta. There is some disagreement about his date of birth, some sources indicating 1906 and many others a more recent vintage, 1914. He began teaching himself the harmonica at a very early age, and he played at local parties around Augusta, where the family moved when he was four and remained for the next ten years. By 1928, he was busking around the streets of Atlanta. "Nobody was my influence," he told Robert Springer of his harmonica playing, in a 1975 interview. "I just kept hearing people, so I listen and I listen, and listen, and it finally come to me."

By the time he arrived in Atlanta, he was good enough to be noticed by Curley Weaver and Robert Barbecue Bob Hicks, who began working with the younger Moss. It was Weaver and Hicks who got him his first recording date at the age of 16, as a member of their group the Georgia Cotton Pickers. On December 7, 1930 at the Campbell Hotel in Atlanta, the group did four songs for Columbia: I'm on My Way Down Home, Diddle-Da-Diddle, She Looks so Good, and She's Comin' Back Some Cold Rainy Day. The group that day consisted of Barbecue Bob and Curley Weaver on guitars and Moss on harmonica. Nothing more was heard from Moss on record until three years later. In January of 1933, however, he made his debut as a recording artist in his own right for the American Record Company in New York, accompanied by Fred McMullen and Curley Weaver, cutting three songs cut that first day, Bye Bye Mama, Daddy Don't Care, and Red River Blues.

In the three years leading up to that date, he'd taught himself the guitar, at which he became so proficient that he was a genuine peer and rival to Weaver. He frequently played with Barbecue Bob, and after Bob died of pneumonia on October 21, 1931, he found a new partner and associate in Blind Willie McTell, performing with the Atlanta blues legend at local parties in the Atlanta area. By the time he started recording in 1933, Moss was so good as a player and singer, that all 11 songs that he cut during the four days of sessions were released, far more than saw the light of day from McMullen or Weaver at those same sessions.

In later years, Moss credited Barbecue Bob with being a major influence on his playing, which would be understandable given the time they spent together. Scholars also attribute Blind Blake as a major force in his development, with mannerisms and inflections that both share. It is also suggested by Alan Balfour and others that Moss may have been an influence on no less a figure than Blind Boy Fuller, although who influenced whom is anyone's guess -- it is clear that Moss' first recordings display some inflections and nuances that Fuller didn't put down on record until some years later.

The January 1933 sessions also featured Moss returning to the mouth harp, as a member of the Georgia Browns -- Moss, Weaver, McMullen, and singer Ruth Willis -- for six songs done at the same sessions. But it was on the guitar that Moss would make his name over the next five years.

Moss' records were released simultaneously on various budget labels associated with ARC, and were so successful that in mid-September of 1933, he was back in New York along with Weaver and Blind Willie McTell. Moss cut another dozen songs for the company, this time accompanied by Curley Weaver, while he accompanied Weaver and McTell on their numbers.

These songs sold well enough that he was back in New York in the summer of 1934, this time as a solo guitarist/singer, to do more than a dozen tracks. At this point, Moss' records were outselling those of big-name colleagues Weaver and McTell, and were widely heard throughout the Southern and border states. This body of recordings also best represents the bridge that Moss provided between Blind Blake and Blind Boy Fuller -- his solo version of Some Lonesome Day, and also Dough Rollin' Papa, from 1934 advanced ideas in playing and singing that Blind Boy Fuller picked up and adapted to his own style, while one could hear in Insane Blues and pick up the lingering influence of Blind Blake.

By August of 1935, Moss saw his per-song fee doubled from $5 to $10 (in a period when many men were surviving on less than that per week), and when he wasn't recording, he was constantly playing around Atlanta alongside McTell and Weaver. When Moss returned to the studio in the summer of 1935, it was with a new partner, Josh White, working under his alias of "The Singing Christian." The two recorded a group of 15 songs in August of 1935, and it seemed like Moss was destined to outshine his one-time mentors Weaver and McTell, when personal and legal disaster struck.

In an incident that has never been fully recounted or explained, Moss was arrested, tried, and convicted in the murder of his wife and sentenced to a long prison term. The truth behind the crime, and the validity of the subsequent conviction, were further called into doubt by the efforts that began almost immediately to secure Moss' release, all to no avail until 1941, when a combination of his own good behavior as a prisoner, coupled with the entreaties of two outside sponsors willing to assure his compliance with parole, helped get him out of jail. It was while working at Elon College under the parole agreement that he met a group of blues musicians that included Sonny Terry and Brownie McGhee.

In October of 1941, Moss, Terry, and McGhee went to New York to cut a group of sides for Okeh/Columbia, including 13 numbers by Moss featuring his two new colleagues. Only three of the songs were ever released, and then events conspired to cut short Moss' recording comeback. The entry of the United States into World War II in December of the same year forced the government to place a wartime priority on the shellac used in the making of 78 rpm discs. There was barely enough allocated to the recording industry to keep functioning, and record companies were forced to curtail recordings by all but the most commercially viable artists; a ban on recording work by the Musicians' Union declared soon after further restricted any chance for Moss to record; and the interest in acoustic country blues, even of the caliber that he played, seemed to be waning, further cutting back on record company interest.

Moss continued performing in the area around Richmond, Virginia and Durham, North Carolina during the mid-'40s, and with Curley Weaver in Atlanta during the early '50s, but music was no longer his profession or his living. He went to work on a tobacco farm, drove trucks, and worked as an elevator operator, among other jobs, over the next 20-odd years.

Although he still occasionally played in the area around Atlanta, Moss was largely forgotten. Despite the fact that reference sources even then referred to him as one of the most influential bluesmen of the '30s, he was overlooked by the blues revival. In a sense, he was cheated by the fact that his recording career had been so short -- 1933 to 1935 -- and had never recovered from the interruption in his work caused by his stretch in prison. Fate stepped in, in the form of some unexpected coincidences. In 1964, he chanced to hear that his old partner Josh White was giving a concert at Emory University in Atlanta. Moss visited White backstage at the concert, and the white acolytes hanging around established legend White suddenly discovered a blues legend in their midst. He was persuaded to resume performing in a series of concerts before college audiences, most notably under the auspices of the Atlanta Folk Music Society and the Folklore Society of Greater Washington. He also had new recording sessions for the Columbia label in Nashville, but none of the material was ever issued.

A June 10, 1966 concert in Washington, D.C. was recorded and portions of it were later released on the Biograph label. Moss played the Newport Folk Festival in 1969, and appeared at such unusual venues as New York's Electric Circus during that same year. During the '70s, he played the John Henry Memorial Concert in West Virginia for two consecutive years, and the Atlanta Blues Festival and the Atlanta Grass Roots Music Festival in 1976.

Buddy Moss died in Atlanta in October of 1984, once again largely forgotten by the public. In the years since, his music was once again being heard courtesy of the Biograph label's reissue of the 1966 performance and the Austrian Document label, which has released virtually every side that he recorded between 1930 and 1941. As a result, his reputation has once again grown, although he is still not nearly as well-known among blues enthusiasts as Blind Willie McTell or Blind Boy Fuller. ~ Bruce Eder, Rovi 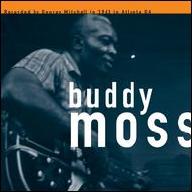 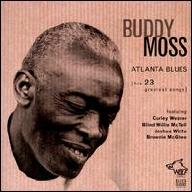 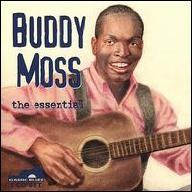 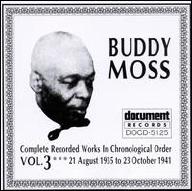 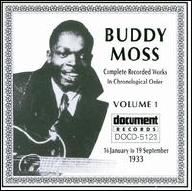 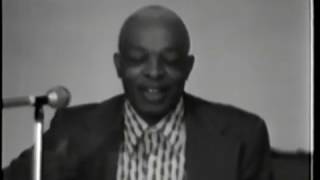 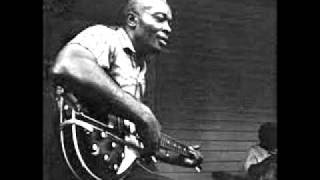 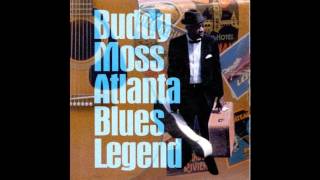 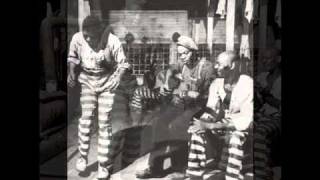 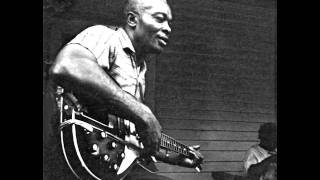