Close
Don Rich
from Olympia, WA
August 5, 1941 - July 17, 1974 (age 32)
Biography
Don Rich is high on the shortlist of great country guitarists of the 20th century, but even that tends to undersell his importance to the genre. As Buck Owens' right-hand man -- first playing fiddle, then transitioning to lead guitar, singing close harmonies all the while -- Rich was instrumental in the development of the lively, electrified Bakersfield sound that dominated the country charts in the '60s and proved to be pivotal in blurring the boundaries between country and rock & roll. Rich was always happy to play at Owens' side, but he also stepped into the spotlight on his own and with Buck's backing band the Buckaroos, releasing a bunch of LPs in the second half of the '60s and early '70s. As the Buckaroos' individual popularity started to fade, so did Rich's solo career, but he was happy to be at Owens' side on-stage and on Hee Haw, the syndicated variety show that made Buck a superstar. This all ended tragically in 1974, when Rich died in a motorcycle accident, but his legacy has loomed large over country music in the 20th century.

Don Rich -- who was born in Olympia, Washington on August 15, 1941 and was adopted by Bill and Anne Ulrich -- began playing music at an early age, learning the fiddle when he was only three, and appearing on local radio broadcasts two years later. Soon he picked up guitar as well, and by the time he entered his teens, he was gigging locally, eventually landing a residence at Steve's Restaurant in Tacoma. It was at this venue that Buck Owens discovered Don Rich. Faced with some professional frustrations in Los Angeles, Owens had then-recently relocated to Tacoma, where he co-owned the KAYE radio station and spent his time DJing and playing shows. Taken with Rich's fiddle skills, Owens immediately hired him to play with him in the Washington area. About two years later, Owens' "Under Your Spell Again" took off on the national country charts so Buck headed back to his hometown of Bakersfield, California, making a plea to Rich to follow along, but Don declined.

Rich decided to attend Centralia College in hopes of becoming a music teacher. He held onto this dream until December of 1960, when he packed it in and headed down to Bakersfield to play with Buck. Don first appeared on 1960's "Excuse Me (I Think I've Got a Heartache)" and, from that point on, the two were inseparable as friends and collaborators, developing the driving, electrified honky tonk variant Owens called the "freight train sound" but which everybody else knew as the sound of Bakersfield Country. This sound clicked into place when Rich moved from fiddle to lead electric guitar, a transition that took place over the course of 1962 and started to flourish in 1963 with the smash single "Act Naturally" and its sequel "Love's Gonna Live Here." Around this time, Owens decided to officially form a backing band called the Buckaroos -- Merle Haggard, who played bass in an early lineup for a couple of weeks, came up with the name -- enlisting Rich as the bandleader. Musicians cycled through the group quite quickly in the early days -- early incarnations of the Buckaroos also featured Kenny Pierce on bass, drummer Ken Presley, and steel guitarist Jay McDonald, among other musicians -- but the classic lineup of Rich, bassist Doyle Holly, steel guitarist Tom Brumley, and drummer Willie Cantu consolidated by the end of 1964.

In addition to leading the Buckaroos, Don Rich co-wrote hits with Owens -- the biggest were "Before You Go" and "Waitin' in Your Welfare Line;" he co-wrote "Think of Me" with Estella Olson -- and after the instrumental "Buckaroo" turned into a country number one in 1965, the Buckaroos started releasing their own LPs, all featuring Don's guitar and sometimes his voice.

The first of these Buckaroos albums was 1966's The Buck Owens Songbook, where the group revisited early Buck hits instrumentally. By most measures, 1966 was the peak year for Buck Owens the Buckaroos, as they were dominating the charts -- charts that also featured plenty of Buck soundalikes -- and headlined Carnegie Hall, but the band remained one of the most popular acts in country music until the early '70s, aided in part by Buck's television stardom as one of the two co-hosts of the cornball variety show Hee Haw. Launched on CBS and later popularized in syndication, Hee Haw made Owens a household name and featured the Buckaroos as the show's house band. As the show's popularity rolled on, so did the Buckaroos LPs, and soon Rich was recording solo projects of his own. In 1970, Don cut a vocal album of George Jones songs, but it was shelved (it received a belated release on Omnivore Records in 2013), but the fiddle-heavy instrumental album That Fiddlin' Man made it into the stores in 1971, as did We're Real Good Friends, a duet album made with Buck's son Buddy Alan.

That Fiddlin' Man didn't hit the charts, nor did the two Buckaroos LPs of 1971, and so Rich's solo recording career slowly came to a close. He returned to his position as Buck's trusted lieutenant, playing on records, in concerts, and on Hee Haw until his tragic death in a motorcycle accident on July 17, 1974 near San Luis Obispo, California. Although Buck Owens continued with the Buckaroos, the singer took Don's death hard and would never fail to give Rich credit for being his musical partner of a lifetime. 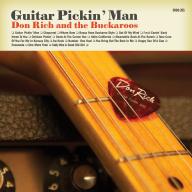 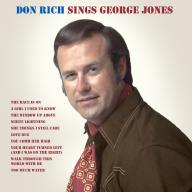 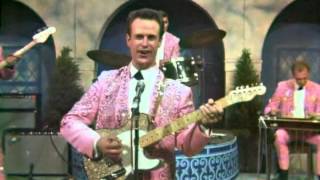 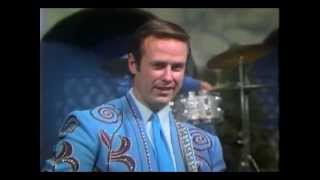 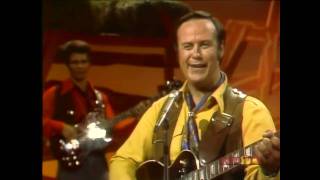 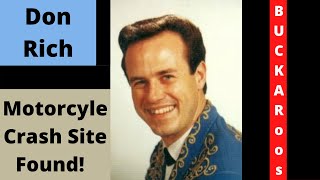 Don Rich. His home and motorcycle crash site is found. 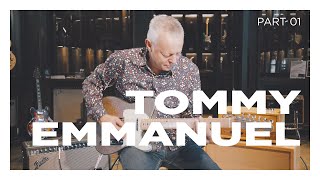 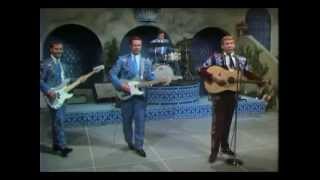 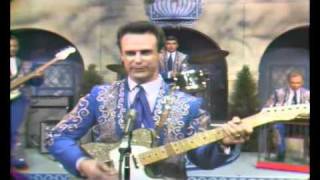