Close
Almanac Singers
from New York, NY
formed January 1, 1941 - January 1, 1942 (age 1)
Biography
The Almanac Singers lasted for barely a year and only left behind three dozen songs, and their work was at least as controversial as it was popular. But they were among the very first folk music groups organized for political purposes to record, and their lineup -- Pete Seeger, Lee Hays, Woody Guthrie, and Millard Lampell -- was a virtual "who's who" of topical and popular folk music for the next 20 years. They were the group where Seeger first hooked up officially with Hays, as well as the first direct link in the careers of Seeger, Hays, and Guthrie, and their influence lingers more than 50 years after they disbanded.

The Almanac Singers had their start in 1940, when Pete Seeger, Lee Hays, and Millard Lampell first got together. Seeger and Hays had already been singing together at various left-wing political functions, and Lampell -- who was Hays' roommate -- began listening to them in their apartment, where Seeger frequently stayed. The trio started out informally, as Lampell joined the duo. The trio performed at fund-raising parties for different political groups, and their music proved extremely popular -- they had an earthy, unpretentious approach to songs, and their deliberate "hillbilly" image fooled prospective audiences, who had no idea what they were in for. Following their rousing performance at the American Youth Congress meeting in Washington, D.C., in February of 1941, where they regaled the delegates -- mostly pacifists and leftists -- with anti-Roosevelt and anti-war songs, the Almanac Singers were a going concern.

Seeger, Hays, and Lampell were not only master songsmiths, but were equally adept at modifying traditional songs, grafting on lyrics that referred to issues of the day, including the mistreatment of workers and the supposed neglect of the government in looking out for them. They would go into meetings of construction men or factory workers, who got restless upon seeing these "hillbillies" with guitars and banjos, but more often than not, hundreds of workers would be joining in on the choruses by the end of the performance, ready to hear and sign on for whatever the meeting organizers asked.

The very name "the Almanac Singers" was intended to keep their image as simple and straightforward as possible. Seeger reasoned that most country people owned only two books, -The Bible and -The Farmer's Almanac, the former intended to get them to the next world and the latter to help them through this one.

Woody Guthrie signed on in the spring of 1941, and eventually Sis Cunningham and Bess Hawes (the sister of Alan Lomax) came aboard as well, although the sextet never recorded as such. Others who got together with the trio or quartet informally on different occasions included bluesmen Leadbelly and Josh White, and folk singers Burl Ives and Richard Dyer-Bennett. Although the Communist Party -- whose New York headquarters was only a few blocks from where Seeger, Hays, and Lampell lived -- regarded the Almanacs as suspiciously free-thinking (especially their urban communal lifestyle) and humorous, they were happy to use the group to further their cause. The group became a popular fixture at union meetings and fund-raising events for various left-wing political groups.

The Almanac Singers' music was closely tied to their politics, and it is impossible to tell of their history without going into their politics, which both inspired the group and also doomed it at the same time. All of the Almanacs were involved with leftist political organizations, including the Communist Party. Some of this can be ascribed to youthful naïveté and innocence, rather than any profound philosophical belief in Marx, Lenin, or Stalin. Additionally, it should be remembered that until the advent of Roosevelt's New Deal, it had seemed to many Americans as though the Communist Party offered the only political voice for poor and working-class Americans. Further, many Americans, especially among the intelligentsia, hadn't abandoned their respect for the Communist Party, especially after it proved to be the only political force in Europe that was firmly opposed to Hitler and the forces of fascism.

Part of the Almanacs' function was to entice labor groups and their members into the fold. They were strongly anti-Roosevelt, owing to what they considered the president's weak support of workers' rights (ignoring the fact that Roosevelt was hated by the upper classes for being too sympathetic to the working class), and his signing of the country's first peace-time draft bill.

In the spring of 1941, after some months without success, the Almanac Singers arranged for their first recording, entitled Songs for John Doe, which took the Communist Party's official isolationist line (Hitler and Stalin having signed a non-aggression pact the previous year), urging listeners to resist any American involvement in the war in Europe. Ironically, the album came out only a few weeks before Germany attacked the Soviet Union, and the Almanac Singers soon had reason to partly disown its content.

That record was made with help from folk-song collector Alan Lomax, future film director Nicholas Ray, and NBC executive Joe Thompson, who convinced Eric Bernay, the owner of a midtown Manhattan record store and a tiny independent label called Keynote, that the Almanacs were a good prospect. Bernay had been involved with leftist politics and was musically open-minded -- he'd played a key role in organizing sponsorship of the Spirituals to Swing concert at Carnegie Hall a few years earlier, for which John Hammond had gone in search of Robert Johnson only to find that the blues legend had died, and instead returned with Big Bill Broonzy. He was wary of the politics behind their music, however, and issued Songs for John Doe on "Almanac Records," to prevent any repercussions against Keynote.

The first record sold well enough for Bernay to have the group record a second album, Talking Union, made up of labor songs, this time on the Keynote label. The Almanacs remained strongly anti-Roosevelt, and at least one of their records aimed at the president got into the hands of his wife, Eleanor Roosevelt, who thought it was in dubious taste, and reportedly angered the president himself. Still, the power of the group's music was undeniable. They weren't doing country or Western music, although they drew on those genres for repertory. In a sense, the Almanac Singers helped define folk music as a commercial category, as the first group to consciously try to sell this repertory to a mass public in this way.

The group cut a new series of songs of a somewhat less political nature on July 7, 1941, in a hastily organized session produced by Alan Lomax, to raise 250 dollars to buy a car to make a trip to California. The core quartet was augmented on some of these songs by the presence of part-time Almanac members Pete Hawes (aka Joe Bowers) and his brother Butch (Bess Lomax's husband). The resulting songs later appeared in two albums, initially issued on 78 rpm disc and later as LPs, and finally on a single CD, entitled Sod Buster Ballads (which the members hated) and Sea Chanties. The group went off to California after doing the 18 songs and didn't know about the albums until they returned months later.

The Almanac Singers' fortunes rose and fell rapidly. They attracted a fair amount of attention due to the success of their appearances at various rallies, especially on their trip out West. Once in California, however, friction began to appear between the members, as their differing goals and purposes became apparent -- Lampell's political motivations were never as strong as those of Seeger, and the fact that he and Guthrie used the group and its music as a means of attracting fairer members of the opposite sex made him suspect, as well as an object of jealousy. Lampell and Guthrie left the fold, while Seeger and Hays continued to work together, augmented by others who sat in.

They returned to the East Coast several months later, where Seeger and Hays began organizing what became known as "Almanac Houses," glorified communal crash pads where would-be singers could come to sit in, listen, and, if need be, to live. Their politics, which remained awkwardly pacifist as the situation in Europe worsened, coupled with the daily changes in American society, made it impossible for the Almanacs to find any lasting stability or success. For all of their leftist sympathies, the Almanac Singers now found themselves lumped together with an ever-shrinking handful of lingering pacifist idealists, disillusioned World War I veterans, and hardcore right-wing Republicans like Congressman Hamilton Fish in opposing American entry into World War II. The attack on Pearl Harbor finally made it possible (and necessary) for the group to break with its isolationist past.

Three months after the attack on Pearl Harbor, in one of the strangest ironies of the group's short history, the Almanac Singers (with Arthur Stern now replacing Lee Hays) were featured in a February 1942 special broadcast carried on all four radio networks entitled This Is War. Their performance was well received, and it looked as though a national radio contract and a recording deal with a major label would follow. But then newspapers began running stories about the group's political history, and the fact that until just a few months earlier they were echoing the Soviet party line and an isolationist position, and any radio or recording deals were forgotten.

The members became scattered to the needs of the American war effort, and the Almanacs dissolved, although Seeger and Hays never seemed to be too far from each other. They later formed the Weavers, endured years of being blacklisted for their old leftist political ties, and still managed to influence another generation indirectly through the music of the Kingston Trio and Peter, Paul Mary, and even the Beach Boys (Sloop John B), among many others. Lampell was also blacklisted, but became a successful songwriter, screenwriter, and novelist. Ironically, despite his being crippled by Huntington's disease, which ended his career after the mid-'50s, Guthrie went on to have the greatest influence of all, with the help of self-proclaimed disciple Bob Dylan.

Perhaps the great, final irony of all was that the Almanacs had popularized the word "hootenanny," meaning an informal gathering of folk singers and listeners, which became so familiar that it became the title of the 1960s ABC television folk music showcase. But because of his past political associations, Pete Seeger, co-founder of the Almanacs, was banned from appearing on Hootenanny. ~ Bruce Eder, Rovi 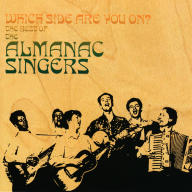 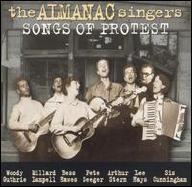 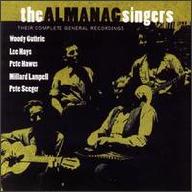 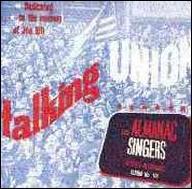 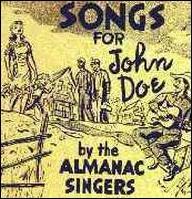 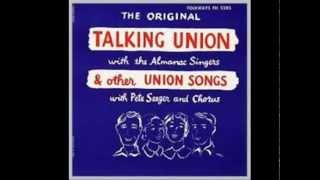 The Almanac Singers - Talking Union and Other Union Songs 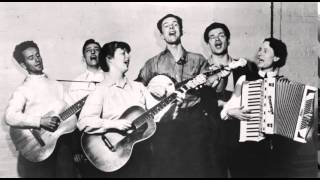 The Almanac Singers - Which Side Are You On 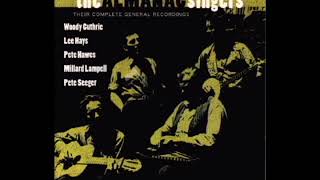 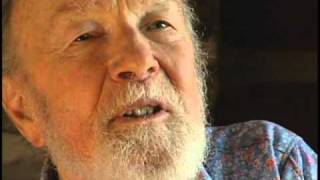 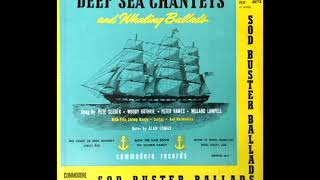 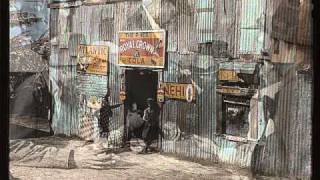 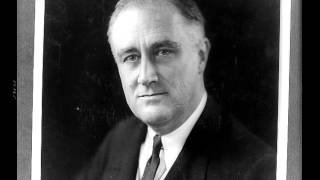