Close
Horace Heidt
from Alameda, CA
May 21, 1901 - January 1, 1986 (age 84)
Biography
Horace Heidt would have been the last man to make grand claims about his musical abilities. What he did have as a bandleader was an ear for talent and the knack for recruiting it, which led to his becoming one of the most successful bandleaders of the late '30s and early '40s. From 1937 until 1945, Heidt and his orchestra enjoyed more than 50 hit records, and were virtually permanent fixtures on the radio. Additionally, his band was a virtual farm team for future major players in popular music, and even a few future jazz players of note passed through the lineup of Heidt's orchestra.

Heidt was born on May 21, 1901 in Alameda, CA. He was encouraged to study piano by his mother, but he seemed an unlikely candidate for a performing career -- apart from lacking interest in music, he also suffered from a stammer during his youth that he only overcame later in life. Additionally, Heidt preferred athletics and was on the football team of the University of California at Berkeley. He seemed destined for a career in professional football until a back injury took him out of sports permanently.

With no sports career in front of him, Heidt decided to organize a small band, then called Horace Heidt His Californians, which played its first concert in 1923 at the Claremont Hotel in Berkeley. By 1929, the band had gotten bigger and had gone through some name changes -- they were booked on a national tour of the vaudeville circuit, which led to an engagement at the Palace Theater in New York City. His national breakthrough took place seven years later, at the Drake Hotel in Chicago, where he got his first radio broadcast and began the gimmick -- a cash giveaway on the air -- that would help make his program a hit for nine years. By that time, the band was known as Horace Heidt His Musical Knights.

By the early '40s, Heidt's Pot O' Gold radio show was sufficiently popular to become the basis for a movie of that same title, produced by James Roosevelt (son of the president), and starring James Stewart and Paulette Goddard with Heidt and his band. His radio broadcasts also translated to success in the recording studio, first for Brunswick and later for Columbia -- Gone with the Wind rose to number one in 1937, Little Heaven of the Seven Seas was a number three hit the same year, and Ti-Pi-Tin hit number one a year later, while The Man with the Mandolin reached number two in 1939. The Hut-Sut Song, with an infectious melody and chorus, was a number three single in 1941 and was virtually a signature tune for the pop culture of the period immediately prior to America's entry into World War II. The singer on most of Heidt's biggest hits was Larry Cotton, a superb tenor and balladeer who just oozed appeal and charm while hitting very sweet notes. Heidt himself was a popular celebrity, but not taken too seriously as a musical figure -- he was in a category of performer similar to that of Kay Kyser (an arch-rival of Heidt's): a personality.

The early '40s were Heidt's heyday, and he had one of the most carefully rehearsed stage and radio shows in the business, and that show served as the launch vehicle for several important careers. The King Sisters got their first important engagement with Horace Heidt His Musical Knights, and Gordon MacRae also sang with the band; another alumnus among the singing groups that he had supporting the orchestra was a young Art Carney (who also turns up in the movie #Pot O' Gold). The musicians who passed through their ranks included future composer (and #America 2night alumnus) Frank DeVol, guitarist Alvino Rey, pianist Frankie Carle, and jazz players Bobby Hackett and Jess Stacy. Heidt himself served as master of ceremonies, and occasionally sang with the orchestra.

Heidt's recording career ended in the mid-'40s after a dispute with his management prevented him from working. Additionally, the big-band era was drawing to a close. Caught in a change of public taste and the music business, Heidt turned his attention to the business of business, investing in hotels and other property -- one of these, the Trianon Ballroom in South Gate, CA, became the home of Heidt's band in the twilight of the big-band era. By the '50s, he was one of the wealthiest men in the entertainment business. Heidt passed away in 1986, but his son, Horace Heidt, Jr., has remained in the music business, inheriting his father's legacy on the nostalgia circuit. ~ Bruce Eder, Rovi 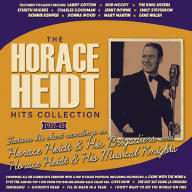 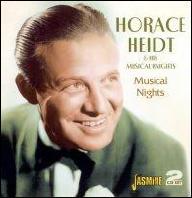 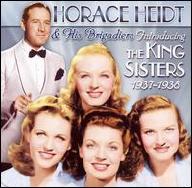 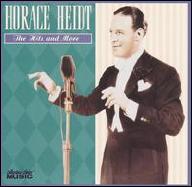 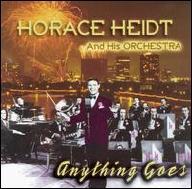 Anything Goes [Sweet Sounds of the Musical Knights]
1999 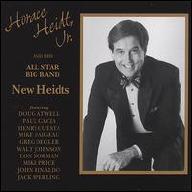 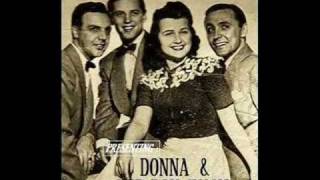 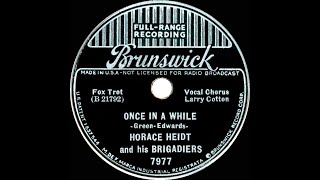 1937 HITS ARCHIVE: Once In A While - Horace Heidt (Larry Cotton, vocal) 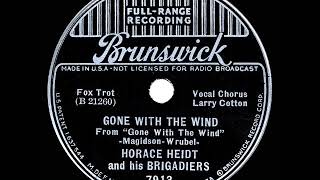 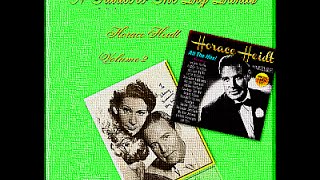 A Tribute to The Big Bands - Horace Heidt 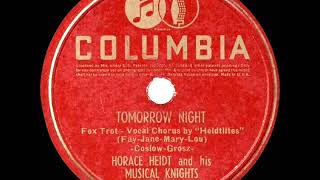 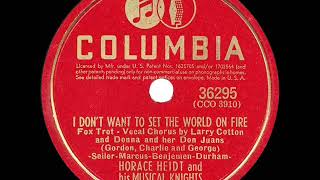 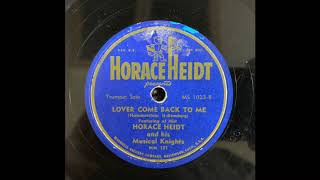