Close
Tangerine Dream
from Berlin, Germany
formed January 1, 1967 (age 55)
Biography
Tangerine Dream are unquestionably one of the most influential electronic groups of all time. Their music has made an immeasurable impact on ambient, new age, techno, trance, and progressive rock, as well as modern film score composition. Founded as a psychedelic rock group in 1967 by Edgar Froese, the group was initially associated with the Krautrock scene through early abstract albums like 1970's Electronic Meditation and 1972's Zeit. They pioneered the use of sequencers with classic albums like 1974's Phaedra and 1975's Rubycon, which proved to be commercially successful. They became prolific film composers, most notably scoring the 1983 blockbuster Risky Business. Subsequent albums such as 1985's Le Parc and 1988's Optical Race incorporated digital instrumentation, as well as shorter, more pop-oriented compositions than their earlier epics. During the '90s, albums such as 1995's Tyranny of Beauty moved closer to the forms of dance music that Tangerine Dream had heavily influenced. During the 21st century, TD gradually drifted back toward the sequencer-driven sound they had pioneered during the '70s. Froese passed away in 2015, but a trio lineup (including notable electronic musician Ulrich Schnauss) continued to record and perform, remaining true to Froese's vision with the 2017 full-length Quantum Gate. Following the addition of Paul Frick as a full-time member, TD released the album Raum in 2022.

Froese, born in Tilsit, East Prussia, in 1944, wasn't much influenced by music while growing up. Instead, he looked to the Dadaist and Surrealist art movements for inspiration, as well as literary figures such as Gertrude Stein, Henry Miller, and Walt Whitman. He organized multimedia events at the residence of Salvador Dali in Spain during the mid-'60s and began to entertain the notion of combining his artistic and literary influences with music; Froese played in a musical combo called the Ones, which recorded just one single before dissolving in 1967. The first lineup of Tangerine Dream formed later that year, with Froese on guitar, bassist Kurt Herkenberg, drummer Lanse Hapshash, flutist Volker Hombach, and vocalist Charlie Prince. The quintet aligned itself with contemporary American acid rock (the Grateful Dead, Jefferson Airplane), and played around Berlin at various student events. The lineup lasted only two years, and by 1969 Froese had recruited wind player Conrad Schnitzler and drummer Klaus Schulze. One of the trio's early rehearsals, not originally intended for release, became the first Tangerine Dream LP when Germany's Ohr Records issued Electronic Meditation in June 1970. The LP was a playground for obtuse music-making -- keyboards, several standard instruments, and a variety of household objects were recorded and filtered through several effects processors, creating a sparse, experimentalist atmosphere.

Both Schulze and Schnitzler left for solo careers later in 1970, and Froese replaced them the following year with drummer Christopher Franke and organist Steve Schroeder. When Schroeder left a year later, Tangerine Dream gained its most stable lineup core when organist Peter Baumann joined the fold. The trio of Froese, Franke, and Baumann would continue until Baumann's departure in 1977, and even then, Froese and Franke would compose the spine of the group for an additional decade.

On 1971's Alpha Centauri and the following year's Zeit, the trio's increased use of synthesizers and a growing affinity for space music resulted in albums that pushed the margin of the style. Atem, released in 1973, finally gained Tangerine Dream widespread attention outside Europe; influential British DJ John Peel named it his LP of the year, and the group signed a five-year contract with Richard Branson's Virgin Records. Though less than a year old, Virgin had already become a major player in the recording industry, thanks to the massive success of Mike Oldfield's Tubular Bells (widely known for its use in the film The Exorcist).

Tangerine Dream's first album for Virgin, Phaedra, was a milestone not only for the group, but for instrumental music. Branson had allowed the group free rein at Virgin's Manor Studios, where they used Moog synthesizers and sequencers for the first time; the result was a relentless, trance-inducing barrage of rhythm and sound, an electronic update of the late-'60s and early-'70s classical minimalism embodied by Terry Riley. Though mainstream critics were unsurprisingly hostile toward the album (it obviously made no pretense to rock & roll in any form), Phaedra broke into the British Top 20 and earned Tangerine Dream a large global audience.

The follow-ups Rubycon and the live Ricochet were also based on the blueprint with which Phaedra had been built, but the release of Stratosfear in 1976 saw the use of more organic instruments such as untreated piano and guitar; also, the group added vocals for 1978's Cyclone, a move that provoked much criticism from fans. Both of these innovations didn't change the sound in a marked degree, however; their incorporation into rigid sequencer patterns continued to distance Tangerine Dream from the mainstream of contemporary instrumental music.

Baumann left for a solo career in 1978 (later founding the Private Music label), and was replaced briefly by keyboard player Steve Jolliffe and then Johannes Schmoelling, another important member of Tangerine Dream who would stay until the mid-'80s. In 1980, the Froese/Franke/Schmoelling lineup was unveiled at the Palast der Republik in East Berlin, the first live performance by a Western group behind the Iron Curtain. Tangerine Dream also performed live on TV with the Munich Philharmonic Orchestra one year later, and premiered their studio work on 1980's Tangram.

Mike Oldfield had shown the effectiveness of using new instrumental music forms as a bed for film on Tubular Bells, and in 1977 The Exorcist's director, William Friedkin, had tapped Tangerine Dream for soundtrack work on his film Sorcerer. By the time the new lineup stabilized in 1981, Hollywood was knocking on the band's door; Tangerine Dream worked on more than 30 film soundtracks during the 1980s, among them Risky Business, The Keep, Flashpoint, Firestarter, Vision Quest, and Legend. If the idea of stand-alone electronic music hadn't entered the minds of mainstream America before this time, the large success of these soundtracks (especially Risky Business) entrenched the idea and proved enormously influential to soundtrack composers from all fields.

Despite all the jetting between Hollywood and Berlin, the group continued to record proper LPs and tour the world as well. Hyperborea, released in 1983, was their last album for Virgin, and a move to Zomba/Jive Records signaled several serious changes for the band during the late '80s. After the first Zomba release (a live concert recorded in Warsaw), 1985's Le Parc marked the first time Tangerine Dream had flirted with sampling technology. The use of sampled material was an important decision to make for a group that had always investigated the philosophy of sound and music with much care, though Le Parc was a considerable success -- both fans and critics calling it their best LP in a decade. Tyger, released in 1987, featured more vocals than any previous Tangerine Dream LP, and many of the group's fans were quite dispirited in their disfavor.

Schmoelling left in 1988, to be replaced by the classically trained Paul Haslinger and (for a brief time) Ralf Wadephul. Optical Race, released in 1988, was the first Tangerine Dream album to appear on old bandmate Peter Baumann's Private Music label. Several more albums followed for the label, after which Haslinger left to work on composing film scores in Los Angeles. His replacement, and the only other permanent member of Tangerine Dream in the years to follow, was Edgar's son Jerome Froese (whose photo had graced the cover of several TD albums in the past). Another record label change, to Miramar, preceded the release of 1992's Rockoon, which earned Tangerine Dream one of their seven total Grammy nominations. The duo continued to record and release live albums, remix albums, studio albums, and soundtracks at the rate of about two releases per year into the late '90s. Meanwhile, the influence of Tangerine Dream's '70s releases upon a generation of electronica and dance artists became increasingly evident, from the Orb's indebted ambient techno to DJ Shadow's sampling of Stratosfear's "Invisible Limits," heard on "Changeling," from 1996's Endtroducing....

During the early 2000s, new material surfaced at a slightly slower rate. In addition to a handful of studio albums -- including 2005's Jeanne d'Arc, for which Froese was first joined by Thorsten Quaeschning, a musician who would figure in several subsequent TD releases -- and a couple soundtracks (Great Wall of China, Mota Atma), there was "the Dante trilogy" (Inferno, Purgatorio, and Paradiso, released from 2002 through 2006) and the five-part "atomic seasons" (with titles like Springtime in Nagasaki and Winter in Hiroshima, created for a Japanese man who survived the bombings of both cities). During these years, keeping tabs on archival releases, both live and studio, was more challenging than ever; most prominently, there was The Bootmoon Series, comprising audience and soundboard recordings of performances dating back to 1977, as well as reissues of the first four albums and several anthologies.

Despite so much focus on the past, epitomized by 40th anniversary concerts that took place in 2007, Tangerine Dream remained equally connected to the present. Sadly, however, the group's long journey under the continued creative guidance of Edgar Froese came to an end when Froese died suddenly of a pulmonary embolism in Vienna in January 2015 at the age of 70. The group's remaining lineup at the time, consisting of Quaeschning along with notable electronic musician Ulrich Schnauss and cellist/violinist Hoshiko Yamane, continued performing and recording as Tangerine Dream. Their first performance as a trio was released as the double-CD Live at the Philharmony Szczesin-Poland 2016. This was followed later in the year by the double-EP Particles, which included the group's interpretation of the theme to the popular sci-fi/horror series Stranger Things. Quantum Gate, Tangerine Dream's first studio full-length without Froese (but largely based on his ideas and sketches), was released by Kscope in September of 2017. The group also released live recordings The Sessions I and II.

In 2020, the band issued Recurring Dreams, an album of classic Tangerine Dream compositions reworked by the current lineup. This collection revisited some of the best-loved songs from the group's catalog as well as expanding on a series of sketches begun by Froese before he died. 2021 saw the band returning to more of Froese's original work, this time with access to his original tape archive and Cubase sessions dating from 1977 to 2013. Revisiting these original works resulted in the revised line-up creating new pieces that nodded back to the band's early days. A taster of their work, Probe 6-8, was issued in late 2021, with the full-length Raum following in 2022. These were the first TD releases featuring Paul Frick (of Brandt Brauer Frick) as a full-time member. ~ John Bush, Rovi 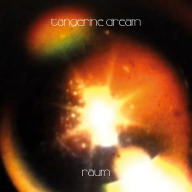 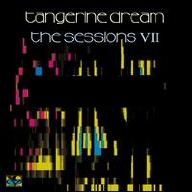 The Sessions VII [Live at the Barbican Hall, London]
2021 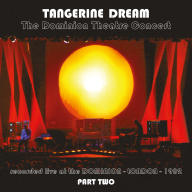 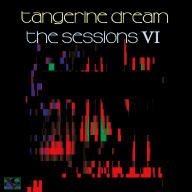 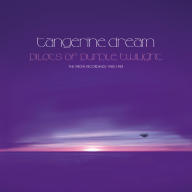 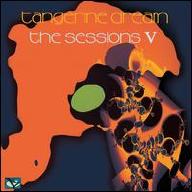 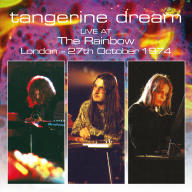 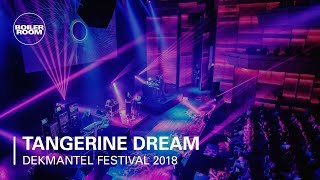 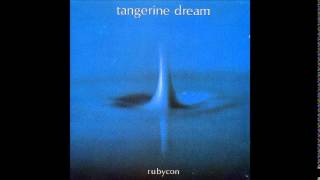 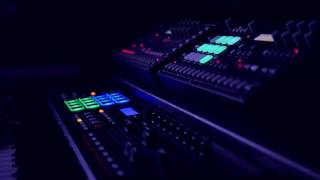 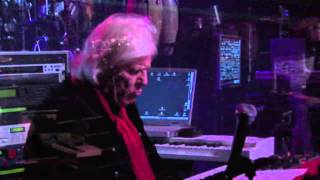 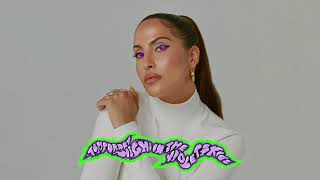 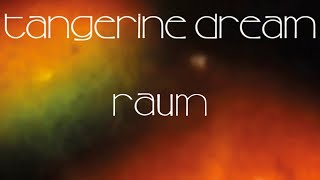 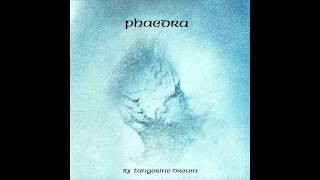