Close
Peter La Farge
from Fountain, CO
January 1, 1931 - January 1, 1965 (age 34)
Biography
To the uninitiated, he seems like little more than a footnote in the biography of Bob Dylan and the recordings of Johnny Cash, but during the early and mid-'60s, Peter La Farge occupied a special niche in contemporary folk music as the first politically aware Native American to attract serious attention. He was dead before the age of 34, but La Farge managed to make a vital and unique contribution to the early-'60s folk revival.

Peter La Farge was descended from the Nargaset Indian tribe, which had virtually ceased to exist by the end of the 19th century. Along with his sister, he was raised by members of the Tewa tribe on the Hopi reservation adjacent to Santa Fe, NM. He spent much of his childhood on a nearby ranch, and was adopted at around age nine by writer Oliver La Farge, author of the 1930 Pulitzer Prize-winning novel -Laughing Child, which dealt with the Navajo Indians. Father and son shared a common love for Native American customs and history, and the two later appeared together at an exhibition of the Hopi Eagle dance in New York City. By the time he was 14, La Farge had a radio show of his own in Colorado Springs, and by 16, he was competing as a rodeo rider and working as a singer. It was in the latter capacity that he even managed to hook up with such luminaries as Josh White and Big Bill Broonzy. Later on in life, Cisco Houston became La Farge's mentor, teaching him about the power of songwriting and helping him to reshape his life.

La Farge served in the United States Navy during the Korean War, earning five battle stars, but he later came to regard the Korean War as a tragic waste of human lives. He resumed his career in the rodeo and began appearing as an amateur boxer during the mid-'50s. A rodeo accident nearly cost him a leg in 1956, and during his extended convalescence, he decided to take up acting. After studying at the Goodman School of Theater in Chicago, he went to New York in the cast of the play #Darkness of the Moon. It was around this same time that La Farge began concentrating more on music as well, especially songwriting, and he found his way to the folk music community in Greenwich Village.

La Farge was spending time with the likes of the young Bob Dylan, Ramblin' Jack Elliot, Dave Van Ronk, and veteran political minstrel Pete Seeger. He was unusual -- a Native American in the beat Mecca of lower Manhattan -- and his songs were welcomed for the power of his words and his message. Additionally, he had a far more mature outlook on the decadence that surrounded him -- at one point, according to some accounts, he was something of an unofficial guardian to the young Dylan, keeping him from finding his way into too much trouble, especially where drugs were concerned.

He was signed to Columbia around the same time that Dylan was making his way as a sessionman on Carolyn Hester's albums, but his relationship with Columbia was short-lived, lasting for one commercially unsuccessful album. His performances in Greenwich Village, however, convinced Moses Asch, the founder of Folkways Records, that La Farge had something to offer, and he immediately offered to record the singer/songwriter. The result was a series of five albums recorded between 1962 and 1965 devoted to Native American themes.

At around the same time that La Farge was recording for Folkways, Johnny Cash heard The Ballad of Ira Hayes, one of La Farge's most heartfelt songs, and later saw La Farge perform in New York. The song told the true story of a Native American who became a hero as a marine on Iwo Jima, but found nothing but despair, unhappiness, and prejudice in civilian life. Cash and La Farge met in Nashville, and the country music star later cut an entire album, Bitter Tears, devoted to the status of the Native American in the United States, which included a half-dozen of La Farge's songs. Cash's single of The Ballad of Ira Hayes reached number three on the country music charts, despite the refusal of many country disc jockeys to play the serious, politically provocative song, and Cash later gave it further exposure with a performance at the 1964 Newport Folk Festival.

La Farge relished the attention that he and his work received as a result of Cash's recordings, but he didn't mute the serious, bitter message behind his songs, and as a result, found himself the object of increasing controversy within the folk community, and of some scorn by reviewers. The fact that he was then seeing a large amount of songwriting money from the Cash single and album only heightened the degree of jealousy felt by other musicians on the folk scene, which was further complicated by La Farge's refusal to exploit this success -- he had the worst of the jealousy of his peers for his success and their further resentment over his decision not to take advantage of this success.

La Farge wasn't helped (assuming he felt he needed the "help") by his refusal to adapt his sound to the changing tastes of the folk audience. In 1964, as in 1960, he sang in a near monotone, seldom staying on pitch and displaying a range of perhaps half an octave. In 1961, this sound was a welcomed addition to the folk underground of Greenwich Village, but by 1964, Bob Dylan was starting to record with a full band; and by 1965, even Phil Ochs, the most self-consciously defiant figure on the Village folk scene, who wrote songs just as angry and sardonic as La Farge's, saw the need to vary and polish his singing and playing to draw a wider audience.

But there was La Farge, still with his stripped-down, almost minimalist sound, a single guitar with a few basic chords, and a lot of anger over a subject that most folkies, much less the general public, scarcely claimed to understand fully. Ochs, by contrast, was just as angry, but was writing about issues -- civil rights, American "imperialism," Vietnam -- that were making the front pages of the newspapers every day, and even he saw the need to dress up his music. La Farge actually considered giving up folk music entirely, rather than face the continued antipathy of his peers and the critics.

Ironically, like Ochs, La Farge died before his time, although not after a long downhill spiral. Indeed, La Farge's final year looked as promising as any in his life. He branched out as a successful artist and painter, married Inger Nielsen, a Danish singer (who later recorded an album of his music), and the two had a daughter. And, in the wake of Johnny Cash's success with his songs, the major record companies were willing to give La Farge a serious second look -- he was signed to MGM Records as a country artist in the fall of 1965, and was planning an album.

He also had serious (though never fully disclosed) health problems, however, and had been under the long term care of a doctor. On October 27, 1965, La Farge was found dead in his apartment in New York. The cause of death was listed as an apparent stroke, although some who knew him thought it was suicide. La Farge was far more well-known to the folk community than the general public, and no less a figure than Julius Lester, the Black activist and author, eulogized him as "the best of the whole lot."

Peter La Farge's legacy remains somewhat obscure, partly because he was singing and writing on a subject that really didn't come to the forefront of most people's awareness until a decade after his death. It took political figures such as Senator Fred Harris of Oklahoma and, later, Ben Nighthorse Campbell of Colorado; events such as the siege at Wounded Knee, coupled with reports of the modern abuses of Native Americans in the plains and Western states; and a few major movies (from #Little Big Man and #Soldier Blue -- ironically both movies that dealt with the Sand Creek Massacre, of which La Farge wrote grippingly in song -- to #Dances with Wolves), before the world caught up with Peter La Farge. His Folkways recordings remain in print by virtue of the Smithsonian Institute, which took over the label's library following Asch's death, and Bear Family Records, which has also reissued them. His debut album on Columbia remains out of print, however, and difficult to find. ~ Bruce Eder, Rovi 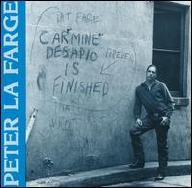 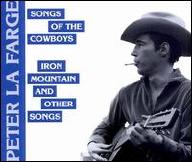 Song of the Cowboys/Iron Mountain & Other Songs
1992 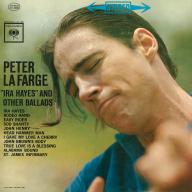 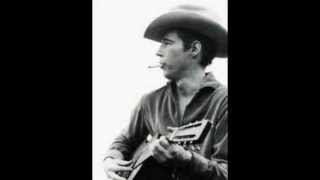 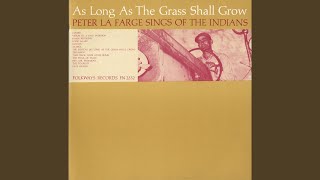 The Senecas: As Long as the Grass Shall Grow 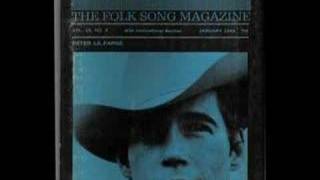 The Ballad of Peter LaFarge 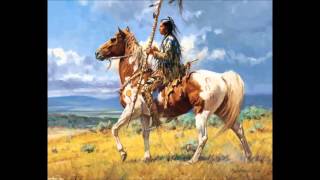 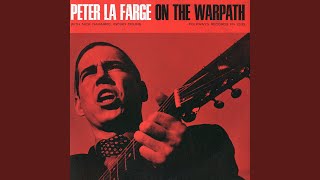 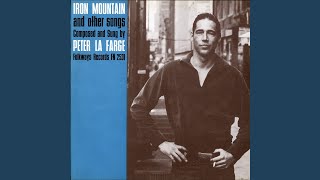 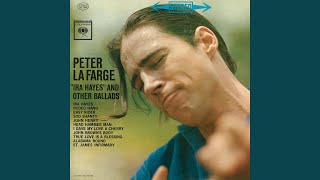