Close
Irene Scruggs
from Mississippi
December 7, 1901 (age 120)
Biography
Blues singer Irene Scruggs was born somewhere in rural Mississippi, but blues anthropologists believe that she came up the river early on her life and was reportedly raised in St. Louis. That bustling town claims her as one of her own, and her career was certainly marked by the type of versatility and generous creativity that St. Louis is known for. Like Chuck Berry would decades later, Scruggs was part of a process wherein traditional rural musical roots blended into newly evolving urban styles. Like two cooks working out of the same spice cabinet, both artists wind up stirring country blues and swing jazz together. The great jazz pianist Mary Lou Williams recalls that Scruggs was already an established force on the St. Louis blues scene the first time Williams went there as a young member of a vaudeville revue. Furthermore, that revue felt it had to hire Scruggs, whose success in vaudeville apparently overshadowed her recording and nightclub career at times. "In St. Louis, our show picked up a young blues singer named Irene Scruggs," Williams said in an interview. "Irene had not long settled in St. Louis, and was starting out to become one of St. Louis' finest singers." This apparently gave Scruggs the cache to get the treasured opportunity to collaborate with several of the bands King Oliver brought to St. Louis in the mid-'20s. Fans of classic jazz should enjoy all the nice playing of her voice off against superb instrumental talent such as clarinetist Albert Nicholas, trombonist Kid Ory, and of course Oliver himself on cornet. She was also well-suited for recording with the fascinating Blind Blake, whose impressive efforts as an accompanist to various singers are collected on the Wolf set The Accompanist: 1926-1931. Women who don't approve of their boyfriends playing the blues will develop a fondness for Scruggs' song Itching Heel, that much is certain. In live shows, it was the setting for lively theatrical business between the singer and Blake, the blind guitarist responding to criticisms of his personality with wild blues licks. "He don't do nothing but play on his old guitar," Scruggs sings, "While I'm busting suds out in the white folks' yard."

Scruggs' earliest recordings were with pianist and bandleader Clarence Williams for Okeh in 1924. She began working with Oliver two years later, and cut a series of sides with the fine bluesman Lonnie Johnson in 1927, again for Okeh. She continued using St. Louis as her base when she formed her own band in the late '20s, gigging regularly at blues and jazz clubs. She recorded with Blake under the name of Chocolate Brown, and also used the alternative blues name of Dixie Nolan for several contract-breaking ventures. In the early '30s, she toured and recorded with Little Brother Montgomery, often stealing the shows with her guest spots. Raunchy, sexy blues became one of her specialties, and this was not a subject she needed time getting used to, since it was one of the major concerns of every female blues recording artist from the pre-war era. Good Grindin' and Must Get Mine in Front were just two example of the explicit sexual enthusiasm contained in her recordings, and it was no surprise that her material was included in -The Nasty Blues, a collection of bawdy blues material and biographies published by Hal Leonard. By the '40s, Scruggs had joined the population of expatriate black performers living abroad, residing first in Paris with her daughter, the dancer Baby Leazar Scruggs. Later she moved to Germany, where she is thought to have died. In the '50s, she did several radio broadcasts for the British BBC. ~ Eugene Chadbourne, Rovi 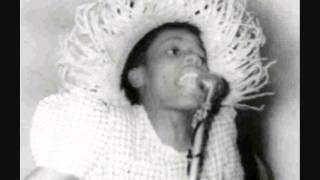 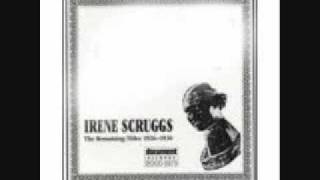 Irene Scruggs -- Back to the wall 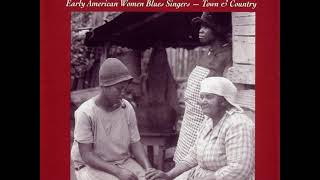 Irene Scruggs, The voice of the blues 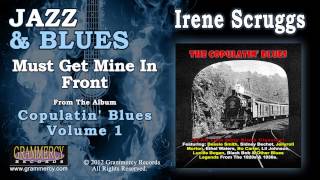 Irene Scruggs - Must Get Mine In Front 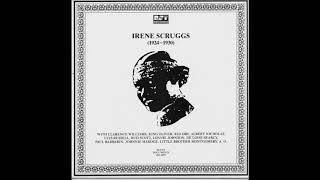 Back to the wall, Irene Scruggs 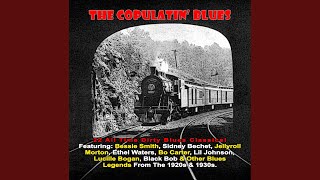 Must Get Mine In Front 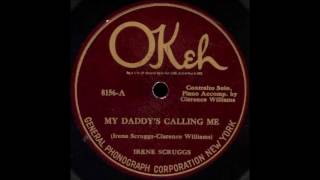 Irene Scruggs My Daddy's Calling Me OKEH 8156 A
Available here: