Close
Cliff "Ukelele Ike" Edwards
from Hannibal, MO
June 14, 1895 - July 18, 1971 (age 76)
Biography
With his cheery tenor voice and ever-present ukulele, Cliff Ukelele Ike Edwards was a major vaudeville star of the 1920s who branched out into record-making (selling a reported 74 million discs), filmmaking (appearing in as many as 100 films), radio, and television. He introduced such songs as Fascinating Rhythm and Toot, Toot, Tootsie! (Goo'bye), and scored his biggest record hits with the chart-toppers I Can't Give You Anything But Love and Singin' in the Rain, but it was as the voice of Jiminy Cricket in the animated film #Pinocchio, singing When You Wish Upon a Star, that he achieved immortality.

Edwards began playing the ukulele to attract attention as a newspaper boy. In his teens, he moved to St. Louis and became a performer, working his way up to the vaudeville circuit. He and his then-partner Bob Carleton introduced Carleton's novelty song Ja-Da in Chicago in 1918; it subsequently was recorded for a hit by Arthur Fields. Around this time, Edwards was dubbed "Ukelele Ike" by a waiter who couldn't remember his name. Splitting from Carleton, he formed an act called "Jazz As Is" with Pierce Keegan, a singer and dancer. In 1920, comedian Joe Frisco took him to New York as part of his troupe.

Edwards crossed over to the legitimate stage, making his Broadway debut in #The Mimic World of 1921, which opened on August 15, 1921, and ran for 27 performances. After several unsuccessful tries, he finally made his recording debut as the kazoo player on Virginia Blues, recorded by Ladd's Black Aces on February 25, 1922. The same year, he introduced Ted Fiorito, Robert A. King, Gus Kahn, and Ernie Erdman's Toot, Toot, Tootsie! (Good'bye) in vaudeville, but lost out on the song when the far more prominent Al Jolson began singing it.

Edwards was signed to Pathe Records and made his recording debut as a leader in New York in November 1923, cutting Old-Fashioned Love and Lovey Come Back. But his first chart success came with a single he recorded in Montreal around February 1924 for Apex (released in the U.S. on Banner and Regal), Where the Lazy Daisies Grow. In April 1924, he achieved the pinnacle of vaudeville success, headlining as a single act at the Palace Theater in New York. In August, he scored his first Top Ten hit with a Pathe recording of It Had to Be You. Returning to the legitimate theater, he was cast in George Gershwin's musical #Lady, Be Good, which opened on December 1, 1924, and ran 330 performances. At the close of the first act, he performed Fascinating Rhythm, and he recorded the song for a Top Ten hit in 1925, also reaching the Top Ten that year with Irving Berlin's All Alone, Walter Donaldson's My Best Girl, and the comic songs Who Takes Care of the Caretaker's Daughter?, If You Knew Susie (Like I Know Susie), and Paddlin' Madelin' Home. Leaving #Lady, Be Good, he joined the cast of Jerome Kern's musical #Sunny, in which he sang I'm Moving Away, a song he co-wrote with Irving Caesar. The show opened on September 23, 1925, and ran 517 performances.

Edwards continued to appear in vaudeville and to score record hits in the second half of the '20s with songs written by the country's top songwriters. In 1926, he hit the Top Ten with Irving Berlin's Remember and Harry Akst, Sam M. Lewis, and Joe Young's Dinah, and in 1927 with J. Fred Coots and Clifford Grey's Sunday and Cliff Friend and Lew Brown's I'm Tellin' the Birds, I'm Tellin' the Bees (How I Love You). Moving to Columbia Records, he made the Top Ten with both sides of his single Together (by DeSylva, Brown, and Henderson)/Mary Ann (by Abner Silver and Benny Davis) in the spring of 1928, then hit number one on October 13 with Jimmy McHugh and Dorothy Fields' I Can't Give You Anything But Love.

Edwards was headlining a four-week engagement at the Orpheum Theater in Los Angeles when MGM head of production Irving Thalberg, looking for talent to complement sound motion pictures, signed him to a four-year contract. Though getting a lucrative movie deal represented a peak in Edwards career, it also marked an inevitable downturn for him. Like many stars of other media coming into pictures, Edwards was not ideally suited physically to roles matching his prominence as a stage and recording star. Short, pudgy, and balding at 33, he just wasn't the screen idol type, but the fame he brought to pictures gave him the right to expect more than just character parts (and he didn't have enough acting experience to play character parts convincingly). He made his movie debut in the summer of 1929 in the all-star talkie extravaganza #Hollywood Revue of 1929, performing Nacio Herb Brown and Arthur Freed's Singin' in the Rain, and his Columbia recording of the song hit number one on August 10.

Edwards spent his time in Hollywood working at MGM for the next few years. He appeared in two more films in 1929, in six each in 1930 and 1931, and in two more in 1932, often co-starring with Buster Keaton and sometimes performing songs he had written. But with the onset of the Depression, the movie studios temporarily lost interest in musicals, and MGM allowed Edwards' contract to expire in 1932. (A similar downturn in the record business had caused Columbia to cut him loose in 1930.) Freed of his movie commitment, he returned to vaudeville, again headlining at the Palace in August 1932, and NBC gave him his own radio series, "Cliff Edwards, Ukelele Ike." Unfortunately, he had developed an extravagant lifestyle that included alcoholism and an addiction to morphine; in March 1933, he filed for bankruptcy. But with the success of the film #42nd Street, Hollywood's interest in musicals was reawakened, and Paramount Pictures signed him to appear in a movie adaptation of the Broadway show #Take a Chance. Released in the fall of 1933, the film contained an interpolation of an obscure song by Harold Arlen, E.Y. Harburg, and Billy Rose previously called If You Believed in Me, and now retitled It's Only a Paper Moon. Edwards recorded it for Vocalion and scored his first chart hit in four years. These successes re-established his career, and he appeared in the Fox studio's film #George White's 1935 Scandals in the spring of 1935, then returned to Broadway with the latest stage version of the same revue, #George White's Scandals, which opened on Christmas Day, 1935, and ran 110 performances.

Edwards' comeback was cemented when he was re-signed to MGM. By now, his reduced stature and increased acting experience were appropriate to the kinds of roles his appearance suggested -- character parts -- and he played a lot of them, including a small role in the 1939 blockbuster #Gone with the Wind. Most important for his future, however, was the use of his voice as the character of Jiminy Cricket in the Walt Disney animated film #Pinocchio in 1940. He sang the Academy Award-winning When You Wish Upon a Star and Give a Little Whistle, and his RCA Victor recordings of those songs gave him his final record hits. Just as important, he began a long-term association with Disney, also lending his voice to 1941's #Dumbo.

Notwithstanding this success, Edwards' finances remained in turmoil, and he filed for bankruptcy for a second time in March 1941 (and for a third time in June 1949). During the '40s, he took to appearing primarily in B-movie Westerns, with some occasional A-movies as well. He became a regular guest on Rudy Vallée's radio show in the late '40s, and in 1949, had two early television series, #The 54th Street Revue and #The Cliff Edwards Show. In 1954, the "Disneyland" TV series signed on the air with Edwards singing When You Wish Upon a Star, and he worked for the Disney company in various capacities in his later years. He died in a nursing home at the age of 76. ~ William Ruhlmann, Rovi 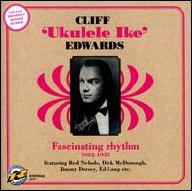 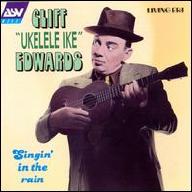 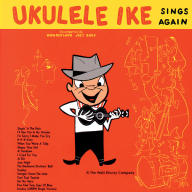 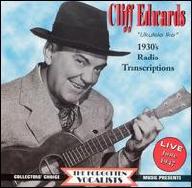 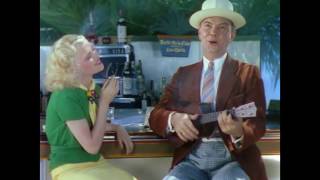 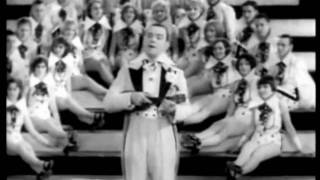 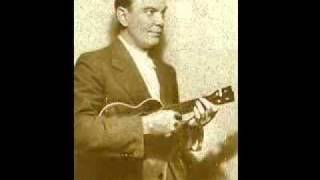 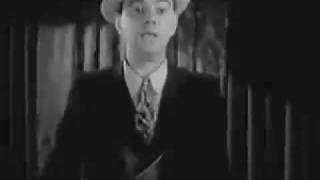 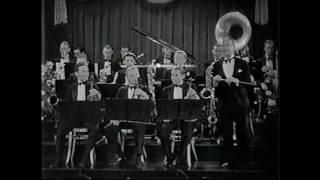 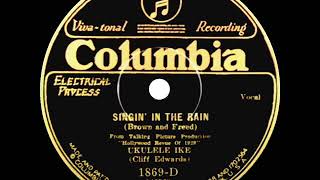 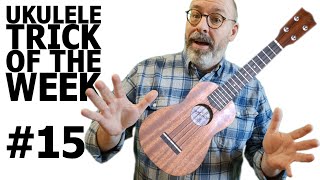