Close
Scott Asheton
from Washington D.C.
August 16, 1949 - March 15, 2014 (age 64)
Biography
Just about every drummer in a punk band in the 1970s modeled their playing after the simplistic yet hard-hitting style of the Stooges' Scott Asheton. Encouraged to learn the drums by his older guitar-playing brother Ron, the duo began by playing along to records with their neighborhood friend Dave Alexander supplying the bass. But it wasn't until Ron asked former high-school acquaintance Jim Osterberg to join in on vocals that the group began to gel. Taking the name the Psychedelic Stooges, the band played around the Detroit area in the late '60s, building a following with their pounding, minimalist hard rock, and honing their stage show opening for the likes of the MC5. At first Asheton played unconventional percussion, such as empty oil drums with a pair of hammers, before moving to a regular kit.

Shortly after streamlining their name to the Stooges, the quartet signed on with Elektra Records, issuing two albums, 1969's self-titled debut and 1970's Fun House, which, although commercially unsuccessful, would go on to become absolute rock classics, almost single-handedly creating what would later be known as punk rock later in the decade. But with touring came increased substance abuse among most of its members, which prompted the original Stooges lineup to split by 1972. Shortly thereafter, however, a new version of the Stooges was formed, with Ron Asheton switching to bass and newcomer James Williamson taking on the six-string duties, resulting in another certifiable classic, 1973's Raw Power. But yet again, success wasn't in the cards for the Stooges, as the band broke up for good the following year, with Scott having to take a year or two off from music to kick his drug addiction and put his life back on track. During the interim, Asheton's drumming style could be easily detected in such disciples as the Sex Pistols' Paul Cook and the Ramones' Tommy Ramone, among countless others.

By the late '70s, Asheton was manning the drums in Sonic's Rendezvous Band, a group that was led by former MC5 guitarist Fred Sonic Smith. But despite releasing a single ("City Slang") and touring, the promising group broke up shortly after Smith married Patti Smith (a live CD of a 1978 show, titled Sweet Nothing, was issued in 1998, and a box set of live tapes and demos appeared in 2006). Not much was heard from Asheton during the '80s, but in the '90s he returned as a member of such groups as Scot's Pirates (on 1994's self-titled debut and 1995's Revolutionary Means), Sonny Vincent's Rat Race Choir (1997's Pure Filth), and Rock Action (the latter a nickname that Pop gave Asheton in the early '70s). In addition, Asheton was interviewed for the superb 1996 book, Please Kill Me: The Uncensored History of Punk (by Legs McNeil and Gillian McCain), recounting the Stooges' history, as well as appearing as part of Iggy Pop's VH1: Behind the Music TV episode in 1999. Asheton also took part in a one-off Sonic's Rendezvous Band reunion in a 1999 show, with former Radio Birdman guitarist Deniz Tek taking the place of the late Fred Sonic Smith.

In 2003, Dinosaur Jr. guitarist J Mascis and his band the Fog invited Ron Asheton and Scott Asheton to join them for a tour, in which they played a variety of Stooges songs from the first two albums. When Iggy Pop got wind of this, he invited the Asheton brothers to join him in the recording studio, with the reunited Stooges recording four songs for Iggy's 2003 album Skull Ring. On April 27, 2003, the Stooges -- with Mike Watt sitting in for the late Dave Alexander on bass -- made their first concert appearance since 1974 at the Coachella music festival in California. The show was well-received, and led to the Stooges returning to duty full-time, playing concert dates and festival appearances around the world and cutting a new album in 2007, The Weirdness. The band maintained a busy schedule until January 2009, when Ron Asheton was found dead in his Ann Arbor home. Several months later, the Stooges were back in action, with Raw Power-era guitarist James Williamson returning on guitar. In April 2013, the new lineup released the album Ready to Die; though Scott Asheton played on the recording sessions, he soon dropped out of the supporting tour due to health problems. The album would prove to be Asheton's grand finale; he died on March 15, 2014. ~ Greg Prato & Mark Deming, Rovi 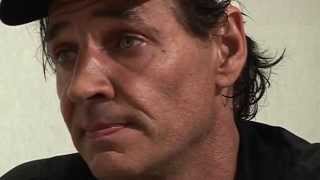 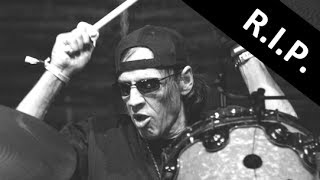 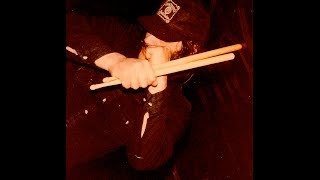 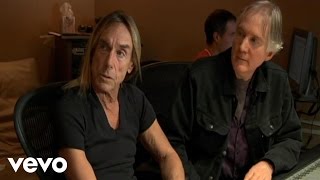 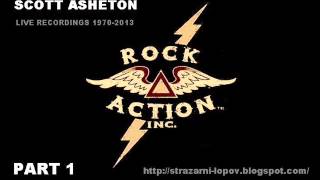 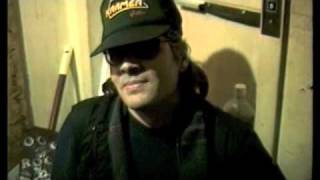 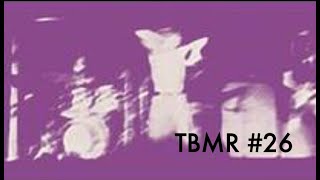 Stooges drummer, Scott Asheton, was playing my kit when I showed up to band practice! TBMR 26
Available here: