Close
Annie Ross
from Mitcham, Surrey, England
July 25, 1930 - July 21, 2020 (age 89)
Biography
With vocal dexterity and a rich, clear tone that put her in the company of the jazz elite at the height of her popularity in the 1950s and '60s, vocalese pioneer Annie Ross enjoyed a second career as a film and television actress. A performer from early childhood, Ross was cast as Judy Garland's sister in the 1943 film musical Presenting Lily Mars as young teen. She later wrote the lyrics for her own breakthrough, the groundbreaking "Twisted," in 1952, and joined Dave Lambert and Jon Hendricks to form Lambert, Hendricks Ross in 1957. One of the most successful jazz vocal groups of the 20th century, the trio went on to record seven albums through 1962. The final one, The Real Ambassadors, was a Dave and Iola Brubeck work that also featured Louis Armstrong and Carmen McRae. After several more years as solo nightclub act, Ross began to find more and more work on-screen, starring in a pair of short-lived TV series in the late '70s, then appearing in films such as Superman III (1983), Pump Up the Volume (1990), and Robert Altman's Short Cuts (1993), in which she also sang. A regular on the cabaret stages well into the next century, Ross released her final album, the Bucky and John Pizzarelli-backed To Lady with Love, in 2014.

Annabelle Macauley Allan Short was born in Mitcham, South London to a pair of Scottish vaudevillians, Jack and Mary Dalziel Short, on July 25, 1930. At the age of three, she accompanied her parents and brother (theater polymath Jimmy Logan) to New York, where she won a radio contest for children run by Paul Whiteman. The prize was a contract with MGM. Her aunt, singer/actress Ella Logan, then moved young Annie to Los Angeles while the rest of the family returned to Britain.

She made her big-screen debut in late 1937 with a role in the comedy short Our Gang Follies of 1938. She played a singer again in the musical fairy tale short Cinderella's Feller in 1940 before winning the role of Judy Garland's younger sibling in the 1943 feature Presenting Lily Mars. The musical comedy also featured appearances by Tommy Dorsey and Bob Crosby with their orchestras. She went on to study acting at the American Academy of Dramatic Art in New York, adopting the stage name Annie Ross after moving back to London. She fell in with the jazz scene in Paris shortly thereafter, recording with American expats including James Moody, Coleman Hawkins, and Kenny Clarke. The latter became the father of Ross' only child, Kenny Clarke, Jr., born in 1950.

Ross returned to New York in 1952 and recorded her debut album, Singin' and Swingin', with members of the Modern Jazz Quartet. That year, at the request of Prestige Records owner Bob Weinstock, she also penned lyrics for saxophonist Wardell Gray's 1949 composition "Twisted," which she recorded with King Pleasure. Though the recording wouldn't be included on an album for another six years, the song became a minor sensation and vocalese milestone, leading to Down Beat magazine presenting her with their New Star award.

Clifford Brown, Art Farmer, Quincy Jones, and Gigi Gryce. She remained based in London for several years, recording albums including Annie by Candlelight (Pye) and Cranks (HMV) before returning to New York for a nightclub engagement in 1957.

In New York, she did a vocal session with Dave Lambert and Jon Hendricks, who were working on an album of Count Basie solos transposed for vocals. Realizing they shared much in common, Ross was invited to join the group, which they christened Lambert, Hendricks Ross. The trio found immediate success with their first album, 1957's Sing a Song of Basie, which set a precedent for intricate, rapid-fire vocals. They followed it with relentless international touring. Separate from the group, Ross made time to record 1958's Annie Ross Sings a Song with Mulligan! featuring Gerry Mulligan on saxophone and Chet Baker on trumpet. The year 1959 offered the Ross solo albums A Gasser! (with Zoot Sims) and Gypsy (with Buddy Bregman Orchestra) as well as the Lambert, Hendricks Ross releases The Swingers! (with Sims), Sing Along with Basie (with Count Basie), and their debut for Columbia Records, The Hottest New Group in Jazz. By that time a heroin addiction that Ross shared with her then-partner Lenny Bruce, began to take a toll, though she continued to work. The group recorded their next two albums for Columbia, 1960's Sing Ellington and the following year's High Flying, with bassist Ike Isaacs. Before disbanding, Lambert, Hendricks Ross contributed to 1962's The Real Ambassadors, sharing billing with Louis Armstrong, Dave Brubeck, and Carmen McRae. Ross then left the group, and the remaining members briefly formed Lambert, Hendricks Bavan with Yolande Bavan.

Moving her base back to London, Ross kicked heroin, opened her own nightclub (Annie's Room), and married English actor Sean Lynch in 1963, the same year she released the albums Sings a Handful of Songs and Loguerhythms: Songs from the Establishment, the latter with the Tony Kinsey Quartet. Pye issued Portrait of Annie Ross in 1965, and a performance with Pony Poindexter, Recorded at the Tenth German Jazz Festival in Frankfurt, appeared the following year. In 1967, Decca delivered the Ross album Fill My Heart with Song.

In the meantime, Ross took guest spots on television series such as The Saint and No Hiding Place and portrayed a jazz singer in the 1969 TV movie The Stiffkey Scandals of 1932. The Decca release You and Me Baby hit shelves in 1971. It proved to be her final record of the decade. In 1972, she appeared in the film thriller Straight on Till Morning and on-stage in a production of The Threepenny Opera starring Vanessa Redgrave. The following year, Ross dubbed Britt Ekland's voice in the horror film The Wicker Man, and in 1974, Columbia released The Best of Lambert, Hendricks Ross.

With her singing less in demand, Ross fell on hard times, and by the end of 1975, she had divorced Lynch, declared bankruptcy, and lost her home. She continued to shift her focus to acting, earning a few more TV guest spots before being cast as a lead on 1978's Send in the Girls. Another short-lived series, Charles Endell, Esq, followed in 1979. Her first recording in ten years, In Hoagland 1981 featured Ross with Hoagy Carmichael and Georgie Fame. The following year marked a return to the stage when she appeared on Drury Lane with Tim Curry and Peter Noone, among others, in the Joseph Papp production of The Pirates of Penzance. Her film career got a boost with a memorable appearance in 1983's Superman III, prompting a relocation to Los Angeles in 1985. Some of the films from her time in Hollywood included the 1987 comedy Throw Momma from the Train, horror sequels Basket Case 2 and 3, 1990's Pump Up the Volume, and two Robert Altman films, 1992's The Player, and the next year's Short Cuts. As jazz singer Tess Trainer in the latter, Ross recorded several songs for the soundtrack, and in 1996, she re-emerged with the album Music Is Forever, featuring pianist Tommy Flanagan. It included a rendition of "Twisted." Ross' final screen acting appearance was that year in the made-for-television movie The Ring of Truth.

Now entering her seventies, Ross became a U.S. citizen in 2001, and eventually returned to the recording studio in August 2005 for Let Me Sing (Consolidated Artists Productions). After issuing an abbreviated version, Harkit Records came back in 2006 with a full-length compilation of 1965 Annie's Room performances titled Live in London. With her legacy still strong, the National Endowment for the Arts named Ross a Jazz Master in 2010, and she was the subject of the documentary No One But Me in 2012. Recorded with guitarists Bucky and John Pizzarelli during a single session in August 2013, her final album, the Billie Holiday tribute To Lady with Love, arrived on the Red Anchor label in 2014. Still actively performing, she was known to appear regularly at Manhattan's Metropolitan Room until it closed in 2017. Annie Ross died at her home in Manhattan on July 21, 2020, just four days short of her 90th birthday. ~ Marcy Donelson, Rovi 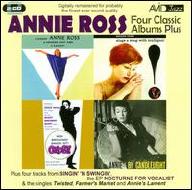 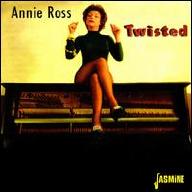 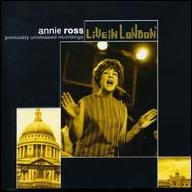 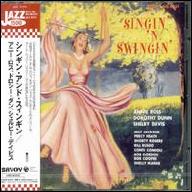 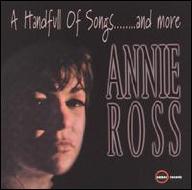 A Handful of Songs and More
2002
Videos
Close 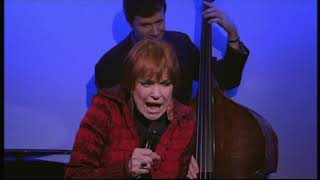 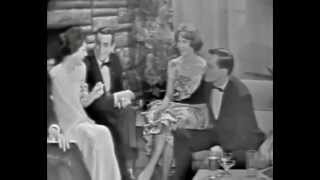 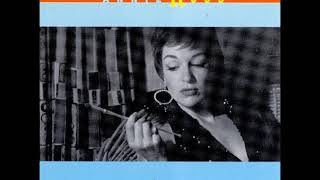 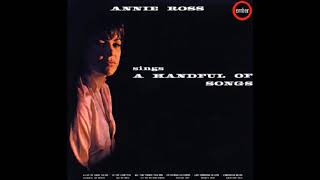 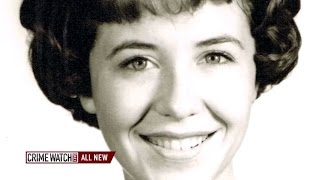 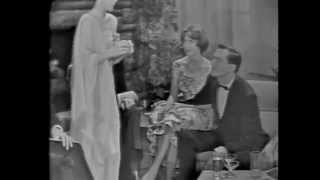 ANNIE ROSS sings Twisted and Everyday I Have The Blues 1959 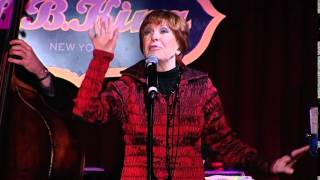