Close
Boz Burrell
from Lincolnshire, England
August 1, 1946 - September 21, 2006 (age 60)
Biography
King Crimson produced enough alumni, amid their myriad membership changes, breakups, and reassemblies over the decades, to fill a decent-sized symphony orchestra. Robert Fripp may be the Crimson mastermind, and Greg Lake their most familiar ex-member as a singer, but singer/bassist Boz Burrell was right up there with Lake as the most successful ex-member. Born Raymond Burrell and known simply as Boz for much of his pre-1970s career, he became a progressive rock hero as a member of Crimson and one of the most famous bassists in the world as a founding member of Bad Company. For a decade before any of that, however, he paid his dues, working in a succession of promising but unsuccessful '60s bands as a vocalist, mostly in a rock and white British soul idiom.

In 1963, Boz was singing with a band called the Tea Time Four, whose lineup included Ian McLagan, later of the Small Faces. They evolved into the Boz People before he exited for the Sidewinders, a quartet whose lineup included Marc Charig, the future cornet player on King Crimson's Lizard, Islands, and Red albums, and Soft Machine drummer John Marshall. Burrell subsequently turned up in Feel for Soul, a band that lasted through 1968. That same year, he recorded a cover of Bob Dylan's Down in the Flood for EMI's Columbia label (credited simply to "Boz") -- the track is sung and played in a slightly archaic folk-rock mode, backed by a band that included Ritchie Blackmore, Ian Paice, Jon Lord (moonlighting from the early Deep Purple), and ex-Outlaw Chas Hodges. It couldn't have sounded much different from his next recording venture.

In 1971, Boz got his break into the big time when he joined King Crimson, an occasion for which he learned to play bass from Robert Fripp. This version of Crimson's lineup dissolved at the beginning of 1972, but not before they'd toured the world and built a bigger following than any of the members (save Fripp) had ever played to before. Burrell, along with drummer Ian Wallace and saxman Mel Collins, made a jump to Snape, an outfit organized around Alexis Korner and Pete Thorup. Snape only lasted until the end of 1972, and then Burrell made the smartest move (financially, at least) of his entire career, becoming a founding member of Bad Company. Bad Company sold tens of millions of records and were the quintessential mid-'70s hard rock supergroup -- they were loud and they could play a good riff for all it was worth, and Burrell's bass (Fripp had taught him well) shared the rhythm section chores with Simon Kirke across five continents -- he also wrote the occasional song, such as Gone Gone Gone from the 1979 Desolation Angels album. Burrell was back in Bad Company for a second go-around in the late '80s with Brian Howe on vocals, but wasn't aboard for two subsequent mid-'90s tours by the re-formed band. In the 1990s, Burrell played on Alvin Lee's Best of British Blues '96 tour, which also included Eric Burdon.

In 1999, Burrell participated in a reunion of the original Bad Company for the first time in 20 years, and also recorded and toured with Scottish blues singer Tam White, appearing with White on that year's Celtic Groove Connection mini-album. Burrell continued to work with White into the 2000s, and in fact White was present at Burrell's apartment in Spain when, during rehearsals, Boz suddenly died of a heart attack on September 21, 2006. Boz Burrell was 60 years old. ~ Bruce Eder, Rovi 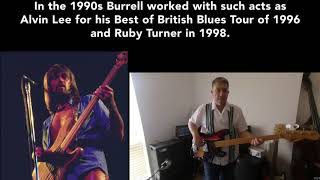 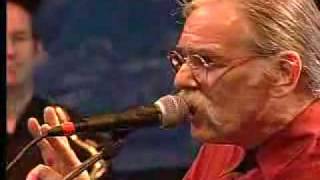 Save Me - Tam White & Boz Burrell 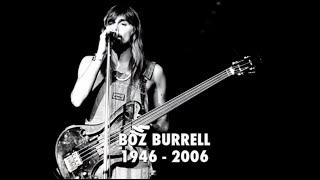 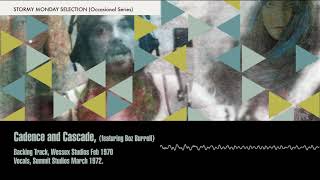 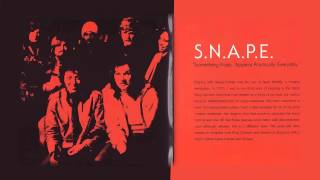 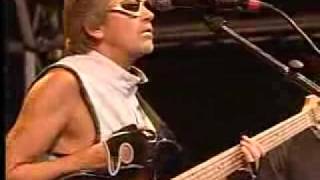