Close
Bob Wills
from Kosse, TX
March 6, 1905 - May 13, 1975 (age 70)
Biography
Bob Wills' name will forever be associated with Western swing. Although he did not invent the genre single-handedly, he did popularize the genre and changed its rules. In the process, he reinvented the rules of popular music. Bob Wills and His Texas Playboys were a dance band with a country string section that played pop songs as if they were jazz numbers. Their music expanded and erased boundaries between genres. It was also some of the most popular music of its era. Throughout the '40s, the band was one of the most popular groups in the country and the musicians in the Playboys were among the finest of their era. As the popularity of Western swing declined, so did Wills' popularity, but his influence is immeasurable. From the first honky tonkers to Western swing revivalists, generations of country artists owe him a significant debt, as do certain rock and jazz musicians. Wills was a maverick and his spirit infused American popular music of the 20th century with a renegade, virtuosic flair.

Wills was born outside of Kosse, TX, in 1905. From his father and grandfather, he learned how to play mandolin, guitar, and eventually fiddle, and he regularly played local dances in his teens. In 1929, he joined a medicine show in Fort Worth, where he played fiddle and did blackface comedy. At one performance, he met guitarist Herman Arnspiger and the duo formed the Wills Fiddle Band. Within a year, they were playing dances and radio stations around Fort Worth. During one of the performances, the pair met a vocalist called Milton Brown, who joined the band. Soon, Brown's guitarist brother Durwood joined the group, as did Clifton Sleepy Johnson, a tenor banjo player.

In early 1931, the band landed their own radio show, which was sponsored by the Burris Mill and Elevator Company, the manufacturers of Light Crust Flour. The group rechristened themselves the Light Crust Doughboys and their show was being broadcast throughout Texas, hosted and organized by W. Lee O'Daniel, the manager of Burris Mill. By 1932, the band was stars in Texas but there was some trouble behind the scenes; O'Daniel wasn't allowing the band to play anything but the radio show. This situation led to the departure of Brown; Wills eventually replaced Brown with Tommy Duncan, who he would work with for the next 16 years. By late summer 1933, Wills, aggravated by a series of fights with O'Daniel, left the Light Crust Doughboys and Duncan left with him.

Wills and Duncan relocated to Waco, TX, and formed the Playboys, which featured Wills on fiddle, Duncan on piano and vocals, rhythm guitarist June Whalin, tenor banjoist Johnnie Lee Wills, and Kermit Whalin, who played steel guitar and bass. For the next year, the Playboys moved through a number of radio stations, as O'Daniel tried to force them off the air. Finally, the group settled in Tulsa, where they had a job at KVOO.

Tulsa is where Wills and His Texas Playboys began to refine their sound. Wills added an 18-year-old electric steel guitarist called Leon McAuliffe, pianist Al Stricklin, drummer Smokey Dacus, and a horn section to the band's lineup. Soon, the Texas Playboys were the most popular band in Oklahoma and Texas. The band made their first record in 1935 for the American Recording Company, which would later become part of Columbia Records. At ARC, they were produced by Uncle Art Satherley, who would wind up as Wills' producer for the next 12 years. The bandleader had his way and they cut a number of tracks that were released on a series of 78s. The singles were successful enough that Wills could demand that McAuliffe -- who wasn't on the first sessions due to ARC's abundance of steel players under contract -- was featured on the Playboys' next record, 1936's Steel Guitar Rag. The song became a standard for steel guitar. Also released from that session was Right or Wrong, which featured Duncan on lead vocals.

Toward the end of the decade, big bands were dominating popular music and Wills wanted a band capable of playing complex, jazz-inspired arrangements. To help him achieve his sound, he hired arranger and guitarist Eldon Shamblin, who wrote charts that fused country with big band music for the Texas Playboys. By 1940, he had replaced some of the weaker musicians in the lineup, winding up with a full 18-piece band. The Texas Playboys were breaking concert attendance records across the country, filling out venues from Tulsa to California, and they also had their first genuine national hit with New San Antonio Rose, which climbed to number 11 in 1940. Throughout 1941 and 1942, Wills and His Texas Playboys continued to record and perform and they were one of the most popular bands in the country. However, their popularity was quickly derailed by the arrival of World War II. Duncan enlisted in the Army after Pearl Harbor and Stricklin became a defense plant worker. Late in 1942, McAuliffe and Shamblin both left the group. Wills enlisted in the Army late in 1942, but he was discharged as being unfit for service in the summer of 1943, primarily because he was out of shape and disagreeable. Duncan was discharged around the same time and the pair moved to California by the end of 1943. Wills revamped the sound of the Texas Playboys after World War II, cutting out the horn section and relying on amplified string instruments.

During the '40s, Art Satherley had moved from ARC to OKeh Records and Wills followed him to the new label. His first single for OKeh was a new version of New San Antonio Rose and it became a Top Ten hit early in 1944, crossing over into the Top 20 on the pop charts. Wills stayed with OKeh for about year, having several Top Ten hits, as well as the number ones Smoke on the Water and Stars and Stripes on Iwo Jima. After he left OKeh, he signed with Columbia Records, releasing his first single for the label, Texas Playboy Rag, toward the end of 1945.

In 1946, the Texas Playboys began recording a series of transcriptions for Oakland, CA's Tiffany Music Corporation. Tiffany's plan was to syndicate the transcriptions throughout the Southwest, but their goal was never fulfilled. Nevertheless, the Texas Playboys made a number of transcriptions in 1946 and 1947, and these are the only recordings of the band playing extended jams. Consequently, they are close approximations of the group's live sound. Though the Tiffany transcriptions would turn out to be important historical items, the recordings that kept Wills and His Texas Playboys in the charts were their singles for Columbia, which were consistently reaching the Top Five between 1945 and 1948; in the summer of 1946, they had their biggest hit, New Spanish Two Step, which spent 16 weeks at number one.

Guitarist Eldon Shamblin returned to the Playboys in 1947, the final year Wills recorded for Columbia Records. Beginning in late 1947, Wills was signed to MGM. His first single for the label, Bubbles in My Beer, was a Top Ten hit early in 1948, as was its follow-up, Keeper of My Heart. Though the Texas Playboys were one of the most popular bands in the nation, they were beginning to fight internally, mainly because Wills had developed a drinking problem that caused him to behave erratically. Furthermore, Wills came to believe Duncan was demanding too much attention and asking for too much money. By the end of 1948, he had fired the singer.

Duncan's departure couldn't have come at a worse time. Western swing was beginning to fall out of public favor, and Wills' recordings weren't as consistently successful as they had been before; he had no hits at all in 1949. That year, he relocated to Oklahoma, beginning a 15-year stretch of frequent moves, all designed to find a thriving market for the band. In 1950, he had two Top Ten hits, Ida Red Likes the Boogie and Faded Love, which would become a country standard; they would be his last hits for a decade. Throughout the '50s, he struggled with poor health and poor finances, but he continued to perform frequently. However, his audience continued to shrink, despite his attempts to hold on to it. Wills moved throughout the Southwest during the decade, without ever finding a new home base. Audiences at dance halls plummeted with the advent of television and rock roll. The Texas Playboys made some records for Decca that went unnoticed in the mid-'50s. In 1959, Wills signed with Liberty Records, where he was produced by Tommy Allsup, a former Playboy. Before recording his first sessions with Liberty, Wills expanded the lineup of the band again and reunited with Duncan. The results were a success, with Heart to Heart Talk climbing into the Top Ten during the summer of 1960. Again, the Texas Playboys were drawing sizable crowds and selling a respectable amount of records.

In 1962, Wills had a heart attack that temporarily debilitated him, but by 1963 he was making an album for Kapp Records. The following year, he had a second heart attack, which forced him to disband the Playboys. After the second heart attack, he performed and recorded as a solo performer. His solo recordings for Kapp were made in Nashville with studio musicians and were generally ignored, though he continued to be successful in concert.

In 1968, the Country Music Hall of Fame inducted Wills and the following year the Texas State Legislature honored him for his contribution to American music. The day after he appeared in both houses of the Texas state government, Wills suffered a massive stroke that paralyzed his right side. During his recovery, Merle Haggard -- the most popular country singer of the late '60s -- recorded an album dedicated to Wills, A Tribute to the Best Damn Fiddle Player, which helped return Wills to public consciousness and spark a widespread Western swing revival. In 1972, Wills was well enough to accept a citation from ASCAP in Nashville, as well as appear at several Texas Playboy reunions, which were all very popular. In the fall of 1973, Wills and Haggard began planning a Texas Playboys reunion album, featuring McAuliffe, Stricklin, Shamblin, and Dacus, among others. The first session was held on December 3, 1973, with Wills leading the band from his wheelchair. That night, he suffered another massive stroke in his sleep; the stroke left him comatose. The Texas Playboys finished the album without him. Wills never regained consciousness and died on May 15, 1975, in a nursing home. He was buried in Tulsa, the place where his legend began. ~ Stephen Thomas Erlewine, Rovi 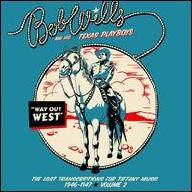 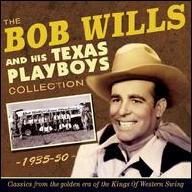 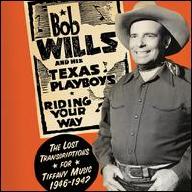 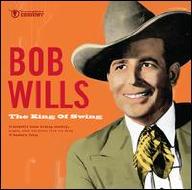 The King of Swing
2011
Videos
Close 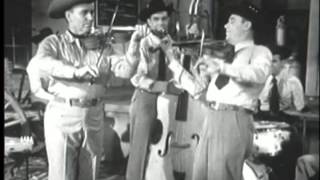 Bob Wills and His Texas Playboys, 1951 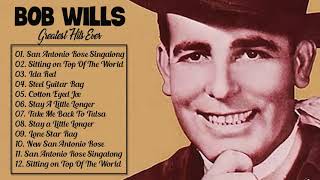 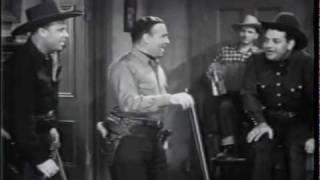 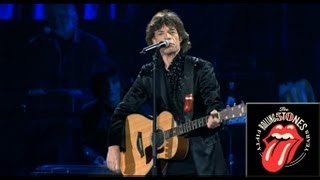 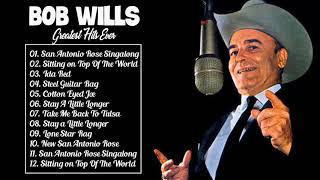 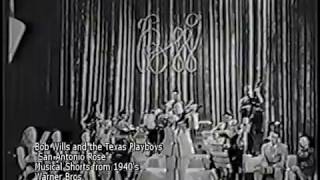 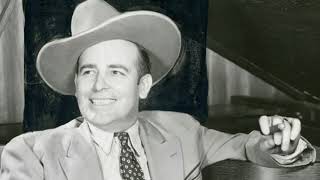