Close
Mats Gustafsson
from Umea, Sweden
October 29, 1964 (age 57)
Biography
Swedish reed player, improviser, and composer Mats Gustafsson's extended saxophone techniques draw equally from the fiery free jazz blowing tradition and the European microtonal school. His hundreds of albums -- either as a leader, in groups (Gunter Christmann's Vario project, the bands Gush, Fire!, and the Thing), or his many collaborations -- showcase an encyclopedic knowledge of jazz, blues, the vanguard classical tradition, folk and even popular song, as well as a curator's gift for concept, while a canny feel for the idiosyncrasies of his musical partners has established his golden reputation as a highly sought-after collaborator. He has recorded and toured with an astonishing variety of players including Peter Brötzmann, Joe McPhee, Derek Bailey, Neneh Cherry, Evan Parker, The Ex, and Tomeka Reid. His 1992 date Mouth Eating Trees and Related Activities with Barry Guy and Paul Lovens is widely recognized as an avant-jazz essential. His solo saxophone dates such as 2008's Mats G Plays Duke E and 2012's Bengt (a tribute to one of his influences, saxophonist Bengt Nordström) reveal the poles of his knowledge and interest, while 2015's Cuts of Guilt, Cuts Deeper with Thurston Moore, Merzbow, and Balazs Pandi, showcases an improvisational aesthetic that embraces rock, even as 2018's Timeless, a duo set with vibraphonist Jason Adasiewicz, focuses on the intimacies of extended harmonics in near melodic language.

Born in 1964 in the culturally rich area of Umeå, he was exposed at a young age to various Swedish improvisers such as saxophonist Lars Göran Ulander and pianist Per Henrik Wallin. His first instrument was the flute, but by his early teens Gustafsson was playing saxophone as well. Around the age of 14, he put his saxophone mouthpiece on his flute to bring an instrument along on a trip, and since then he has played this creation, the fluteophone, in addition to other, more standard reed instruments. His first improvisations were with drummer Kjell Nordeson, who would later form the AALY Trio with Gustafsson.

Gustafsson moved to Stockholm in the mid-'80s, and there met musicians such as percussionist Sten Sandell and drummer Raymond Strid. The three formed Gush in 1988, two years after Gustafsson's duo with Christian Munthe, Two Slices of Acoustic Car, began. He also worked with Berlin-based Sven-Åke Johansson during this time, thus becoming acquainted with the German scene. In 1990, Gustafsson performed in Derek Bailey's Company in London. He also began visiting the U.S. regularly, becoming a regular in the Chicago improvising community as the '90s progressed, working extensively with Hamid Drake and Ken Vandermark, among others. Gustafsson has also performed and recorded with Barry Guy, Paul Lovens, Georg Graewe, and Jaap Blonk, and as a member of Peter Brötzmann's all-star Chicago Octet/Tentet. Gustafsson has collaborated with artists in other media as well, including dance, theater, poetry, and painting.

His many ongoing projects include the aforementioned AALY Trio, with Nordeson and bassist Peter Janson, whose third album, Live at the Glen Miller Cafe, came out on the Wobbly Rail label in 1999. In 2000, he issued a new solo album on the Drag City subsidiary Blue Chopsticks, a Steve Lacy tribute entitled Windows. Hidros One followed in early 2001.

Gustafsson became especially prolific as the 21st century began, releasing close to three dozen albums in the next ten years either as a leader or collaborator. Some of his recordings include Dat and I Love It When You Snore with Paal Nilssen-Love (2002); Blues with David Stackenäs and Off Road with David Grubbs (2003); Hidros 3 with Sonic Youth (2004); Slide Away (2005); The Fat Is Gone with Nilssen-Love and Brötzmann (2007); Mats G Plays Duke E (2008); Mats G Plays Albert A (2009); Needs! (2010); One Bird Two Bird with Masami Akita (aka Merzbow) and Jim O'Rourke; and Bengt (2012).

In 2008, Gustafsson, Nilssen-Love, and bassist Ingebrigt Håker Flaten formed the trio the Thing, who recorded a handful of albums, including Cherry Thing in collaboration with vocalist Neneh Cherry in 2012. In 2009, he formed Fire! with Johan Berthling and Andreas Werliin; the group has recorded four albums, including the stellar In the Mouth: A Hand in 2012 in collaboration with guest guitarist Oren Ambarchi.

Gustafsson teamed with saxophonist Colin Stetson for Stones, which was released in January 2013, followed in March by the RareNoise release of Cuts in collaboration with Merzbow and Balázs Pándi. In November of that year, the Thing issued Boot! after establishing their own label, the Thing Records. The year 2014 saw the saxophonist in collaboration with Nu Ensemble on Hidros6 Knockin' on Not Two, and the solo Torturing the Saxophone on Corbett vs. Dempsey. In total, he played on or released no less than a dozen records.

The year 2015 was no less prolific. Marking his fiftieth year, he kicked it off with Cuts of Guilt, Cuts Deeper, another RareNoise session with Merzbow, Pandi, and Thurston Moore. The saxophonist and guitarist released Hit the Wall! through Smalltown Supersound. Gustafsson was also active in his various other bands: his Gush trio with Raymond Strid and Sten Sandell released The March, Slobber Pup (with Jamie Saft, Pandi, and Joe Morris) offered Pole Axe through RareNoise, and the Thing issued their 12th album, The Shake. In October, Gustafsson celebrated his birthday with three nights of concerts at the Porgy & Bess Theater in Vienna. Featuring various solos, duos, trios, and quartets, it also included performances by both the Thing and Fire! A four-disc box set was released by Trost in mid-2016 as MG50: Peace and Fire. It not only included concert highlights, but a booklet filled with essays and photographs; it was credited to Mats Gustafsson Friends. The same year, a greatly expanded Fire! -- renamed the Fire! Orchestra -- released Ritual via Rune Grammofon. Verses, a duo with Ken Vandermark, arrived in 2017, followed a year later by Timeless with Jason Adasiewicz. Also in 2018, Cuts Up, Cuts Out, the sequel to 2015's acclaimed Cuts of Guilt, Cuts Deeper with Thurston Moore, Merzbow, and Balazs Pandi, was issued by Rare Noise Brace For Impact from Corbett vs. Dempsey followed a month later; it was an archival duo outing with multi instrumentalist Joe McPhee, that was recorded over two sessions in 2007 and 2010.

Gustafsson worked the road and the globe for much of 2019, playing halls, clubs and festivals, leaving precious little time to work in the studio. That said, a couple of compelling releases were issued that year. In April, Smaltown Supersound released Link, from a 2006 duo session with Christian Marclay. In December, Corbett vs. Dempsey released The Shithole Country Boogie Band Featuring Mats Gustafsson. Mats provided raw sax improvisations to experimental electronicist Wendy Gondeln (who also added spindled sounds from her deliberately primitive violin playing). The pair recruited Martin Siewert to add guitar to a pair of tracks, and invited minimal techno pioneer and Kompakt label co-founder Wolfgang Voigt to edit and remix two others.

In early 2020, the Greek label Underflow (an outlet of the Athens art gallery and record store) released the limited-edition box set Worn. Kissed. Recorded just weeks before, it featured a trio of Gustafsson improvisations on three vinyl sides inspired by the paintings of Edward Jarvis, whose exhibition then adorned the gallery's walls. It also included a 48-page exhibition catalog. It was followed by the digital-only issue of Countdown in July on the Italian Superpang label. Gustafsson employed his bass and baritone saxophones, organ, bass drum, and electronics. In September, Rare Noise released Cuts Open, a double-length document of the Gustafsson, Merzbow, and Pandi trio, recorded two years earlier. While it retained the aggressive and visceral qualities of its immediate predecessors, the 86-minute, four-track set explored airier (though no less aggressive) soundscapes saturated in an atmosphere of dread. ~ Joslyn Layne & Thom Jurek, Rovi 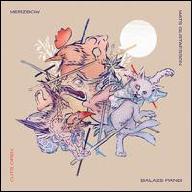 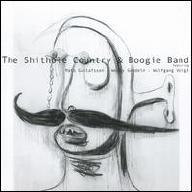 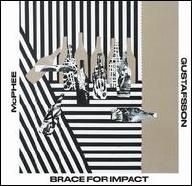 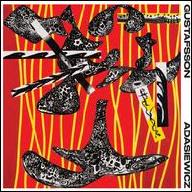 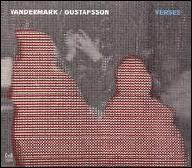 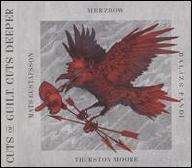 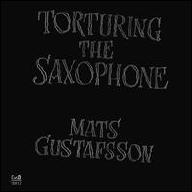 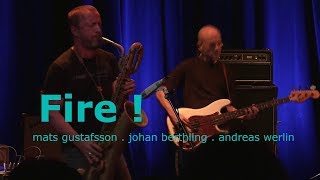 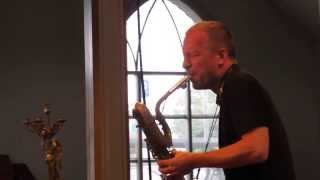 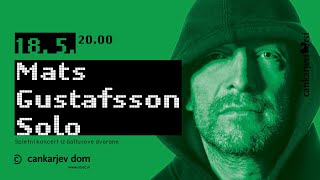 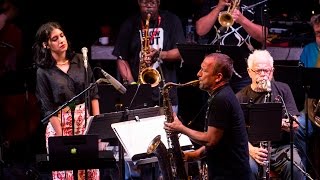 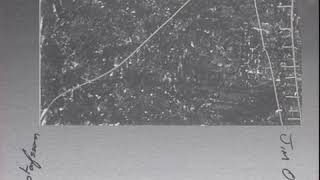 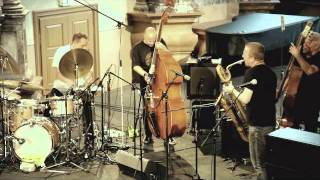 Mats Gustafsson and THE THING plus Barry Guy in Vilnius, April 2011 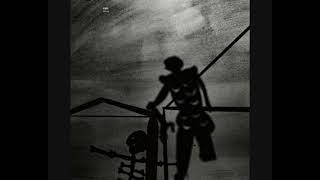