Close
Woody Herman
from Milwaukee, WI
May 16, 1913 - October 29, 1987 (age 74)
Biography
A fine swing clarinetist, an altoist whose sound was influenced by Johnny Hodges, a solid soprano saxophonist, and a spirited blues vocalist, Woody Herman's greatest significance to jazz was as the leader of a long line of big bands. He always encouraged young talent and, more than practically any bandleader from the swing era, kept his repertoire quite modern. Although Herman was always stuck performing a few of his older hits (he played Four Brothers and Early Autumn nightly for nearly 40 years), he much preferred to play and create new music.

Woody Herman began performing as a child, singing in vaudeville. He started playing saxophone when he was 11, and four years later he was a professional musician. He picked up early experience playing with the big bands of Tom Gerun, Harry Sosnik, and Gus Arnheim, and then in 1934, he joined the Isham Jones orchestra. He recorded often with Jones, and when the veteran bandleader decided to break up his orchestra in 1936, Herman formed one of his own out of the remaining nucleus. The great majority of the early Herman recordings feature the bandleader as a ballad vocalist, but it was the instrumentals that caught on, leading to his group being known as "the Band That Plays the Blues." Woody Herman's theme At the Woodchopper's Ball became his first hit (1939). Herman's early group played with a Dixieland feel to many of the looser pieces, with vocals contributed by Mary Ann McCall, in addition to Herman. They recorded very frequently for Decca, and for a period had trumpeter/singer Billie Rogers as one of their main attractions.

By 1943, the Woody Herman Orchestra was beginning to take its first steps into becoming the Herd (later renamed the First Herd). Herman had recorded an advanced Dizzy Gillespie arrangement (Down Under) the year before, and during 1943, Herman's band became influenced by Duke Ellington; in fact, Johnny Hodges and Ben Webster made guest appearances on some recordings. It was a gradual process, but by the end of 1944, Woody Herman had what was essentially a brand new orchestra. It was a wild, good-time band with screaming ensembles (propelled by first trumpeter Pete Candoli), major soloists in trombonist Bill Harris and tenorman Flip Phillips, and a rhythm section pushed by bassist/cheerleader Chubby Jackson and drummer Dave Tough. In 1945 (with new trumpeters in Sonny Berman and Conte Candoli), the First Herd was considered the most exciting new big band in jazz. Several of the arrangements of Ralph Burns and Neal Hefti are considered classics, and such Herman favorites entered the book as Apple Honey, Caldonia, Northwest Passage, Bijou (Harris' memorable if eccentric feature), and Your Father's Mustache. Even Igor Stravinsky was impressed, and he wrote Ebony Concerto for the orchestra to perform in 1946. Unfortunately, family troubles caused Woody Herman to break up the big band at the height of its success in late 1946.

Herman recorded a bit in the interim, and then, by mid-1947, had a new orchestra, the Second Herd, which was also soon known as the Four Brothers band. With the three cool-toned tenors of Stan Getz, Zoot Sims, and Herbie Steward (who a year later was replaced by Al Cohn) and baritonist Serge Chaloff forming the nucleus, this orchestra had a different sound than its more extroverted predecessor, but it could also generate excitement of its own. Trumpeter/arranger Shorty Rogers and eventually Bill Harris returned from the earlier outfit, and with Mary Ann McCall back as a vocalist, the group had a great deal of potential. But, despite such popular numbers as Jimmy Giuffre's Four Brothers, The Goof and I, and Early Autumn (the latter ballad made Getz into a star), the band struggled financially. Before its collapse in 1949, such other musicians as Gene Ammons, Lou Levy, Oscar Pettiford, Terry Gibbs, and Shelly Manne made important contributions.

Next up for Woody Herman was the Third Herd, which was similar to the Second except that it generally played at danceable tempos and was a bit more conservative. Herman kept that band together during much of 1950 to 1956, even having his own Mars label for a period; Conte Candoli, Al Cohn, Dave McKenna, Phil Urso, Don Fagerquist, Carl Fontana, Dick Hafer, Bill Perkins, Nat Pierce, Dick Collins, and Richie Kamuca were among the many sidemen. After some short-lived small groups (including a sextet with Nat Adderley and Charlie Byrd), Herman's New Thundering Herd was a hit at the 1959 Monterey Jazz Festival. He was able to lead a big band successfully throughout the 1960s, featuring such soloists as high-note trumpeter Bill Chase, trombonist Phil Wilson, the reliable Nat Pierce, and the exciting tenor of Sal Nistico. Always open to newer styles, Woody Herman's bop-ish unit gradually became more rock-oriented as he utilized his young sidemen's arrangements, often of current pop tunes (starting in 1968 with an album titled Light My Fire). Not all of his albums from this era worked, but one always admired Herman's open-minded attitude. As one of only four surviving jazz-oriented bandleaders from the swing era (along with Duke Ellington, Count Basie, and Stan Kenton) who was still touring the world with a big band, Herman welcomed such new talent in the 1970s as Greg Herbert, Andy Laverne, Joe Beck, Alan Broadbent, and Frank Tiberi. He also recorded with Chick Corea, had a reunion with Flip Phillips, and celebrated his 40th anniversary as a leader with a notable 1976 Carnegie Hall concert.

Woody Herman returned to emphasizing straight-ahead jazz by the late '70s. By then, he was being hounded by the IRS due to a manager from the 1960s not paying thousands of dollars of taxes out of the sidemen's salaries. Herman was forced to keep touring and working constantly into his old age. He managed to put on a cheerful face to the public, celebrating his 50th anniversary as a bandleader in 1986. However, his health was starting to fail, and he gradually delegated most of his duties to Frank Tiberi before his death in 1987. Tiberi continued to lead a Woody Herman Orchestra on a part-time basis but it never had the opportunity to record. Fortunately, Herman was well documented throughout all phases of his career. ~ Scott Yanow, Rovi 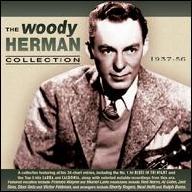 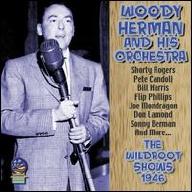 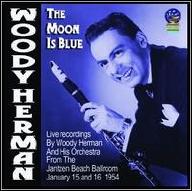 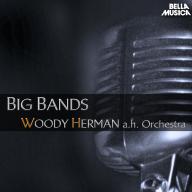 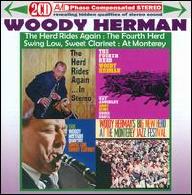 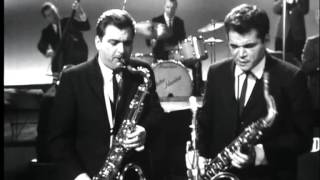 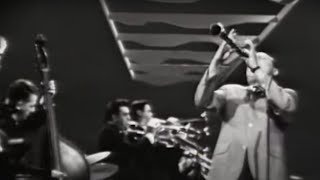 Woody Herman And His Orchestra "Caldonia" on The Ed Sullivan Show 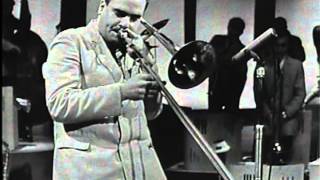 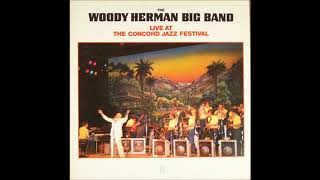 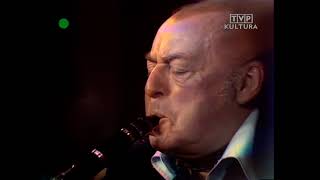 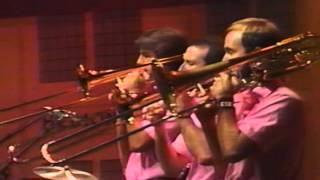