Close
Ronnie Hawkins
from Huntsville, AR
January 10, 1935 - May 29, 2022 (age 87)
Biography
Ronnie Hawkins had one of the longest and most influential careers of the artists from the original rockabilly uprising that came from the American South in the 1950s. The twist in his tale was that Hawkins became a living legend outside the United States. Though born in Arkansas, he found his greatest, most enduring popularity in Canada, where he barnstormed clubs for years, cut a handful of hit singles, and led a group that became a rock & roll boot camp for many noted musicians, particularly the five men who would find fame as the Band. Hawkins was a good singer but a great entertainer, a raucous rockabilly howler who knew how to work a crowd, deliver a potent blend of rock, R&B, blues, and country sounds, and dazzle the audience with over-the-top dance moves and acrobatic stage tricks. Ronnie Hawkins' legend (boosted by his gift for spinning tall tales about his on- and off-stage antics) often outstipped the evidence captured on his recordings, but there are plenty of gems scattered throughout his catalog. 1990's The Best of Ronnie Hawkins the Hawks is devoted to his fiery material of the late 1950s and early '60s, 2008's Ronnie Rocks covers much of the same territory with the addition of some worthy later sides, and the 1996 two-fer CD Rock Roll Resurrection/The Giant of Rock Roll includes two of his best comeback albums of the 1970s in full.

Ronnie Hawkins was born in Huntsville, Arkansas on January 10, 1935; fellow rockabilly Elvis Presley was born two days earlier. Ronnie's father was a barber, and his mother was a schoolteacher. When Ronnie was nine years old, his family relocated to Fayetteville, thirty miles away, where father opened a barbershop. Ronnie's family was full of active amateur musicians, while his uncle Delmar Skipper Hawkins would join Roy Rogers' group the Sons of the Pioneers, and his cousin Dale Hawkins scored a major hit single in 1957 with "Suzie Q." Ronnie spent plenty of time at his father's barbershop, where he met Buddy Hayes, a blues musician who shined shoes as his day job and introduced the youngster to Black music. When Ronnie was eleven years old, he began performing in public, and once appeared at a Hank Williams concert. When the country icon was too intoxicated to take the stage, Hawkins was one of several spectators given the chance to sing with his band. By the time he was a teenager, Hawkins had soaked up the myriad influences of Southern music, and he developed a passion for risk as he took a job running moonshine in a souped-up Model A Ford, where he made as much as $300 a day.

Hawkins briefly attended the University of Arkansas, where he formed the first of several rock & roll bands, and he served an abbreviated hitch in the United States Army, where he led a combo called the Black Hawks, a racially integrated group at a time when that was all but unheard of. (The group's sax player, A.C. Reed, would later become a fixture on the Chicago blues scene and spent several years in Albert Collins' road band.) Hawkins cut some demos for Sun Records that fell on deaf ears, though the guitarist in Sun's house band, Luke Paulman, though Hawkins had talent, and they put together a band, the Hawks, that charged through the South, with the musicians laying out 100-proof rock while Hawkins entertained the crowd with backflips, somersaults, and wild dance steps while he sang. The Hawks featured George Paulman (Luke's brother) on bass, Willard Pop Jones on piano, and a teenaged drummer from Turkey Scratch, Arkansas, Levon Helm, whose folks wouldn't allow him to join the group before he finished high school. While Hawkins and his crew were playing one nighters wherever anyone would have them, an old friend, Harold Jenkins, was enjoying success as a rockabilly singer under the name Conway Twitty, and he told Hawkins there was a big demand for quality rock bands in Canada, where he'd recently toured. Hawkins was initially wary, but Twitty was good to his word, and the Hawks found an audience eager for their energetic brand of rock & roll in Toronto, and soon they were spending several months of the year playing clubs in Canada.

In 1959, Ronnie Hawkins landed a record deal with Roulette Records, and his first single, "Forty Days" (a knock-off of Chuck Berry's "Thirty Days") backed with "Mary Lou," became a hit, peaking at Number 26 on the singles chart. The record's success boosted their asking price for shows, and Hawkins and the Hawks continued to hit the road hard in the United States (especially the South and Midwest) and Canada, faring well enough to replace their Chevrolet with a Cadillac. By the time Hawkins cut his first album for Roulette, Ronnie Hawkins, he and his band were based in Toronto, and after a second album for Roulette, 1959's Mr. Dynamo, his sidemen began occasionally popping up on his recording sessions, though as the label began losing faith in Hawkins as a rockabilly star, they pushed him towards offbeat projects like 1960's The Folk Ballads of Ronnie Hawkins and 1962's Sings The Songs of Hank Williams.

As musicians began dropping out of the Hawks lineup, Hawkins started replacing them with local talent. By 1964 (the year he released his last Roulette album, the uneven but occasionally rollicking Mojo Man), Hawkins became a permanent resident in Canada (though he retained his U.S. citizenship), and his band included guitarist Robbie Robertson, bassist Rick Danko, pianist Richard Manuel, and organ player Garth Hudson, as well as Helm on drums. The Hawks had been honed into a first-rate rock & roll band after countless weeks on the road and extended residencies at Le Coq d'Or Tavern on Toronto's Yonge Street. (A live recording of this edition of the Hawks saw belated release in 2021, Live at Fayetteville High School 1962: Volume 1.)

The Hawks were good enough, in fact, that after playing some shows where Hawkins wasn't able to show up, they split off on their own, and started touring and recording as Levon and the Hawks. In 1965, Bob Dylan tapped them to be his touring band after he went electric, and while Helm would drop out for a while after British audiences made their disinterest in Dylan's electric music clear, he would rejoin when the Hawks relocated to Woodstock, New York, and after many months of woodshedding with Dylan, they evolved into the Band, one of the most celebrated rock bands of their day.

While his former charges were becoming stars, Hawkins continued to perform steadily in Canada, as his band became a training ground for aspiring rockers in the North. Future blues legend Roy Buchanan, hard rock guitar hero Pat Travers, Neil Young and Garland Jeffreys sideman Stan Szelest, and many of the members of Janis Joplin's Full Tilt Boogie Band and the Canadian blues and boogie group Crowbar had all cut their teeth backing up Hawkins. When John Lennon and Yoko Ono decamped in Toronto while campaigning for peace, Hawkins put them up at his estate, which he called "Mortgage Manor," and joined their crusade, later saying that he appreciated Lennon's company but wished the former Beatle had paid for the many long-distance phone calls he'd made. As the Band's stardom grew, so did the profile of their former leader, who relished in telling spicy stories about their wild times on the road when he sat for interviews. In 1970, the Atlantic-distributed Cotillion label signed Hawkins, and with Tom Dowd and Jerry Wexler as producers, he cut Ronnie Hawkins, with Duane Allman and members of the Muscle Shoals Rhythm Section backing him up. A second album for Cotillion, 1971's The Hawk, also paired him with a group of top-shelf Southern session players (including Donald Duck Dunn and Jim Dickinson), and the single "Patricia" rose to Number 2 on Canada's Adult Contemporary chart. Striking up a friendship with Kris Kristofferson led to Hawkins next signing with Monument Records. 1972's Rock Roll Resurrection was dominated by classic tunes from Chuck Berry, Bo Diddley, Fats Domino, and other first-generation rock legends, while the setlist for 1974's The Giant of Rock Roll mixed rock & roll oldies with tunes from contemporary songwriters like Gordon Lightfoot and Jesse Winchester. (In the midst of all this, he made a vocal cameo on an 1973 album by Xaviera Hollander, a former madame who published a best-selling memoir and starred in a handful of low-budget films.)

After his albums for Cotillion and Monument failed to break him to a larger audience, Hawkins focused on live work, regularly appearing at his own club in Toronto, though he made showy appearances in a pair of movies. Bob Dylan cast Hawkins as "Bob Dylan" in his experimental film Renaldo Clara (shot in 1975 and released in 1978), and he sang a lively version of "Who Do You Love" in Martin Scorsese's 1978 documentary The Last Waltz, shot at the Band's farewell concert in November 1976. Hawkins landed a deal with United Artists Records, and The Hawk, produced by Keith Alison, arrived in 1979. Hawkins also made a small but memorable appearance in another United Artists product the following year, playing Major Wolcott in Michael Cimino's notorious historical drama Heaven's Gate. In 1981, the Canadian Quality label released A Legend in his Spare Time (one of Hawkins' many self-deprecating mottos), which included a cover of Creedence Clearwater Revival's "(Stuck In) Lodi" that was a Top Ten single in Canada. The following year, The Hawk and Rock documented a tour of the United Kingdom, where he was hailed as a hero by British rockabilly fans. In 1984, Hawkins struck a deal with Epic Records Canada, and recorded a country-themed album, Making It Again, which earned him a Juno Award for Best Country Vocalist, while 1987's Hello Again … Mary Lou was an upbeat session with a side ROCK and a side ROLL. (Unlike Making It Again, Hello Again … Mary Lou was released outside Canada, with labels in Europe and the Netherlands making it available, though neither came out in the United States). He published an autobiography in 1989, Last of the Good Ol' Boys.

By the early 1990s, while Hawkins was still regularly performing in Canada and was a living legend of Toronto rock & roll, he'd managed to invest his earnings wisely and was financially comfortable, making music because he loved it and not having to worry about paying the rent. In 1995, Hawkins celebrated turning 60 years old with a concert at Toronto's prestigious Massey Hall, with guest appearances from Jerry Lee Lewis, Carl Perkins, Jeff Healey, and members of the Band. 1996 saw Hawkins honored by the Canadian Academy of Recording Arts and Sciences with a Special Achievement for his contributions to the Canadian music business; the Canadian performance rights organization the Society of Composers, Authors and Music Publishers similarly gave Hawkins a lifetime achievement trophy in 2007. In 2002, Hawkins issued his final album, The Hawk; released on his own label, it included guest appearances from Levon Helm, Robbie Robertson, and Kris Kristofferson. The album proved to be a respite in a difficult year; Hawkins had a quadruple heart bypass operation, and just a few months later, underwent further surgery to treat pancreatic cancer. His health made live performances less frequent, but he continued to make music when the spirit moved him, and in 2016 he cut material at his home studio with Gordon Lightfoot and Kris Kristofferson, which produced a digital single of "Me and Bobby McGee." Ronnie Hawkins died on May 29, 2022 at his home in Peterborough, Ontario at the age of 87 after a long illness. In his memoirs, Hawkins summed up his career with these words: "Ninety percent of what I made went to women, whiskey, drugs and cars. I guess I just wasted the other ten percent." ~ Mark Deming, Rovi 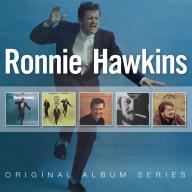 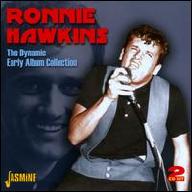 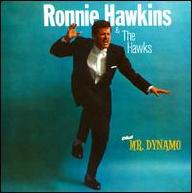 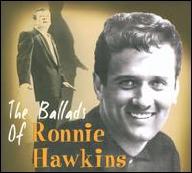 The Ballads of Ronnie Hawkins
2011 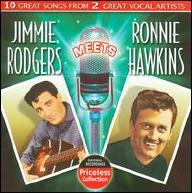 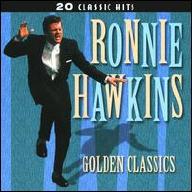 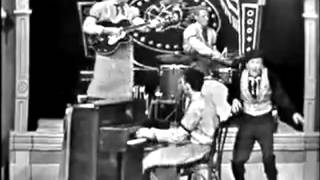 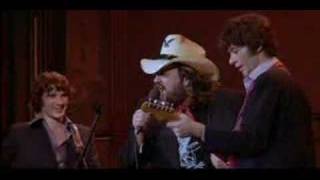 The Band & Ronnie Hawkins - Who Do You Love 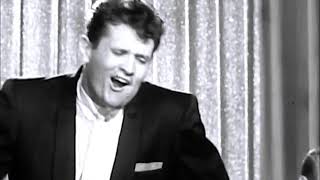 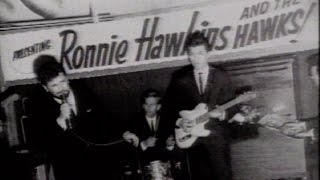 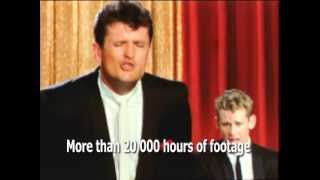 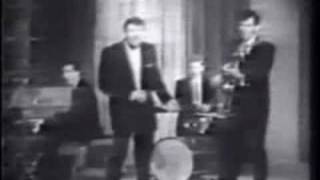 here's proof - michael jackson stole the moonwalk - this is the original! 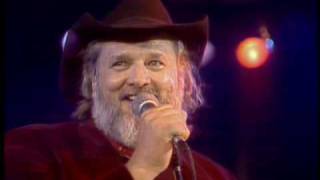