Close
David Murray
from Berkeley, CA
February 19, 1955 (age 67)
Biography
Initially an inheritor of an abstract/expressionist improvising style that originated in the '60s by such saxophonists as Albert Ayler and Archie Shepp, David Murray eventually evolved into something of a mainstream tenor, playing standards with conventional rhythm sections. However, Murray's readings of the old chestnuts are vastly different from interpretations by bebop saxophonists of his generation. Murray's sound is deep, dark, and furry with a wide vibrato -- reminiscent of such swing-era tenors as Ben Webster and Coleman Hawkins. And his approach to chord changes is unique. Although it's apparent that he's well-versed in harmony, Murray seldom adheres faithfully to the structure of a tune. He's adapted the expressive techniques of his former free jazz self (slurred glissandi, indefinite pitches, ambiguous rhythms, and altissimo flights) to his straight-ahead playing, with good results. He'll plow right through a composition like "'Round Midnight," hitting just enough roots, thirds, fifths, and sevenths to define the given harmonies, then filling every other available space with non-chord tones that may or may not resolve properly. In other words, he plays the wrong notes, in the same way that Eric Dolphy played the wrong notes. Like Dolphy, Murray makes it work by dint of an unwavering conviction. The sheer audacity of his concept, the passionate fury of his attack, and the spontaneity of his lines -- in other words, the manifest success of his aesthetic -- make questions of right and wrong irrelevant.

Murray's parents were musical; his mother played piano and his father guitar. In his youth, Murray played music in church with his parents and two brothers. He was introduced to jazz while a student in the Berkeley school system, playing alto sax in a school band. When he was 13, he played in a local group called the Notations of Soul. Hearing Sonny Rollins inspired Murray to switch from alto to tenor. He attended Pomona College, where he studied with a former Ornette Coleman sideman, trumpeter Bobby Bradford. Around this time, he was influenced by the writer Stanley Crouch, whom he met at Pomona. Murray moved to New York at the age of 20, during the city's loft jazz era -- a time when free jazz found a home in deserted industrial spaces and other undervalued bits of urban real estate below 14th Street. Murray and Crouch opened their own loft space, which they called Studio Infinity. Crouch occasionally played drums in Murray's trio with bassist Mark Dresser. In a relatively short time, Murray (with help from his unofficial publicity agent, Crouch) acquired a reputation as a potential great. Murray's early work was exceedingly raw, based as it was on the example of Ayler, who had a penchant for multiphonics, distorted timbres, extremes of volume, and forays into the horn's uppermost reaches and beyond. He made his first albums in 1976, Flowers for Albert (India Navigation) and Low Class Conspiracy (Adelphi), with a rhythm section of bassist Fred Hopkins and drummer Phillip Wilson. Also in 1976, Murray became -- with Julius Hemphill, Oliver Lake, and Hamiet Bluiett -- a founding member of the World Saxophone Quartet. Around this time, Murray was commissioned by theatrical impresario Joseph Papp to assemble a big band, which enjoyed a degree of critical success. Out of the big band came the formation of an octet, which provided him a platform for his increasingly ambitious compositions.

In the '80s, Murray performed with the WSQ, his octet, and various small bands, recording mostly for the Italian Black Saint label. His octet records of the time -- though very roughly executed -- showed him to be a talented (if unformed) composer. Murray's recording activity reached nearly absurd levels in the '80s and '90s; probably no contemporary jazz musician has led more dates on more labels. It was in the '80s that Murray began relying more on the standard jazz repertoire, especially in his small ensemble work. As he got older, the wilder elements of that style were toned down or refined. Murray incorporated free jazz gestures into a more fully rounded voice that also drew on the mainstream of the jazz improvising tradition.

In the '90s, the influence of his swing- and bop-playing elders became stronger, even as the passionate abandon and spontaneity that marked his early work were replaced by his attention to the craft of playing the horn. Murray recorded just as often as he had with Black Saint. DIW signed a distribution deal with Columbia in the early '90s. He recorded a number of important albums during that decade, including Special Quartet with McCoy Tyner, Fred Hopkins, and Elvin Jones and Shakill's Warrior with Don Pullen on Hammond B-3, drummer Andrew Cyrille, and guitarist Stanley Franks -- the latter stretched the B-3 soul-jazz genre into entirely new terrain. He cut a one-off album for Red Baron entitled Jazzosaurus Rex, and fronted Pierre Dørge's New Jungle Orchestra for the Jazzpar Prize album. During this period, Murray's Black Saint albums began to appear as reissues on CD, so record store shelves were bursting with his titles. In 1995, Murray released one of the most compelling and little-known albums in his career on France's Bleuregard imprint. Flowers Around Cleveland was recorded with pianist Bobby Few, drummer John Betsch, and bassist Jean-Jacques Avenel -- the rhythm section from the Steve Lacy Quartet. It was a risky match that paid off gloriously; it offered proof that in spite of his towering presence as a soloist, Murray was also a sensitive stylist and team player.

In fact, Murray became an inimitable stylist, which was underscored by DIW's release of Ballads for Bass Clarinet that same year. He threw jazz fans a true and deeply satisfying curve ball in releasing Dark Star: The Music of the Grateful Dead on Astor Place, with a large group that included Hopkins, Craig Harris, and even the Dead's own Bob Weir. Murray also began a long and fruitful relationship with Justin Time, a Canadian label distributed through Enja. He recorded what was -- at the time -- the most revolutionary and controversial recording of his career in Fo Deuk Revue, which featured a large group of African and American musicians, with layers of drums and chanted vocals along with poetry and recitations by Amiri Baraka. It wove together funk, jazz, and various African folk styles that began to draw Murray in. They would emerge full-blown in the 21st century. In 1998 he issued four albums of new material. First was another variation on the B-3 soul tip with Jug-A-Lug on DIW, his tribute to the music of Gene Ammons with organist Robert Irving, electric bassist Darryl Jones, and guitarists Bobby Broom and Darryl Thompson, with Olu Dara guesting on trumpet. This was followed on the same label by the moving The Long Goodbye: A Tribute to Don Pullen and the stellar The Tip. Murray also recorded his second album for Justin Time in 1998 with Creole, a large-group album that offered a meld of jazz as influenced by numerous Latin and Brazilian styles. Murray also continued to record and tour with the World Saxophone Quartet.

In the 21st century, Murray began the decade prolifically. In 2000 he released three albums and in 2001 four. Of these, the most satisfying was the 2000 release Octet Plays Trane on Justin Time. In 2002 Murray made the stellar Yonn-Dé for the label, his first David Murray the Gwo-Ka Masters offering; the others would be 2004's Gwotet (with Pharoah Sanders) and 2009's The Devil Tried to Kill Me. Murray issued a dizzying array of recordings in that first decade, including Now Is Another Time with his Latin Big Band, Waltz Again in 2005 featuring his quartet in a setting backed by strings, and Silence in 2008, as well as five more with the WSQ. In 2010, Murray's complete Black Saint and Soul Note recordings were given the box set treatment. His first recording of new material in the century's second decade found the saxophonist on Emarcy with a new band called the David Murray Cuban Ensemble. Their debut for the label was Plays Nat King Cole en Español, released in October of 2011, which interpreted, song for song, two albums the singer and pianist recorded in Spanish and Portuguese -- in 1958 and 1962 -- respectively. Murray's fiery persona as a vanguard improviser still reveals itself in his performances and on select recordings. That said, manifested more frequently now are his abilities as an artful composer, arranger, and bandleader who also happens to be a master technician on the tenor saxophone and bass clarinet. Murray debuted his new Infinity Quartet on his 2013 recording Be My Monster Love with pianist Marc Cary, bassist Jaribu Shahid and drummer Nasheet Waits. The album also featured cameo appearances from vocalists Macy Gray and Gregory Porter, as well as trumpeter Bobby Bradford, the saxophonist's former teacher. In 2017 Murray issued Cherry/Sakura, a collaboration with Japanese pianist and composer Aki Takase.

Back in 2014, Murray attended the funeral of longtime friend, poet and activist Amiri Baraka, whom he had collaborated with as early as 1987 on the poet's New Music, New Poetry. There he witnessed Saul Williams reciting a poem. The chance encounter led to a collaboration between the two artists, with Williams sending Murray a collection of poems to set to music. Like Baraka, Williams is challenging. He is socially and politically engaged and consistently employs visceral images in his work. Their jointly recorded album, 2018's Blues for Memo, features Williams stringing together images on topics ranging from politics to the nature of consciousness, from health, capitalism, and forced labor to poems about earth formations and cosmic time. ~ Chris Kelsey, Rovi 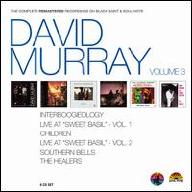 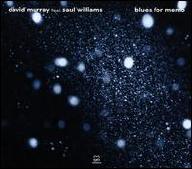 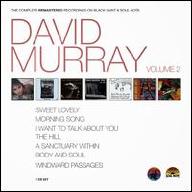 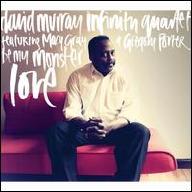 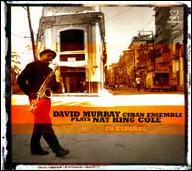 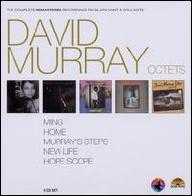 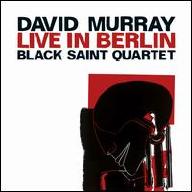 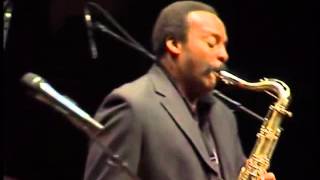 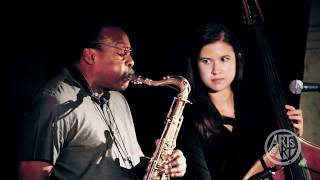 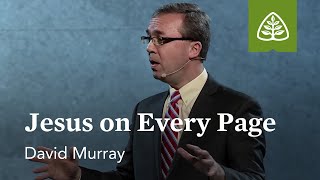 David Murray: Jesus on Every Page 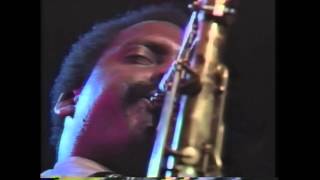 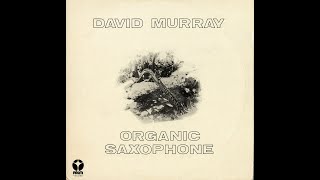 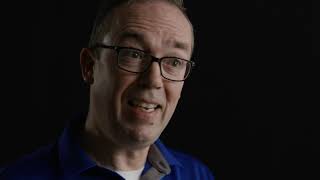